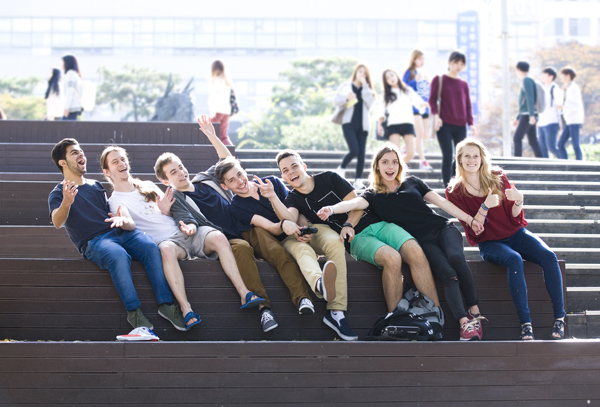 The number of foreign students in Korea exceeded 90,000 this year, according to statistics provided by the Ministry of Education, a 5.3-fold increase from 2004.

And as a result, many universities have implemented programs and modifications to accommodate them, including establishing venues that have come to be known as English lounges. Most of the lounges resemble regular coffee shops, except students are prohibited from using any language other than English.

“Compared to five years ago, there are noticeably more international students on campus,” said university student Sung Sang-mook, 25. “I often visit the lounge because I can talk with foreigners without going abroad.”

Another student, surnamed Jang, is similarly involved in a school club devoted to language exchange with international peers. The 28-year-old often goes on field trips and participates in volunteer programs with some 100 international students from about 20 different countries.

“When I visited a karaoke bar with the international students, I was surprised that they sang songs from [the Korean idol group] Big Bang, instead of Western pop songs,” Jang said. “I realized how influential the Korean Wave really was.”

School cafeterias at many universities have also gotten on board, creating new menus for overseas students. Hanyang University in northwestern Seoul, for instance, was the first school here to add a halal menu for Muslim students.

“We decided to prepare halal food four days a week to accommodate the increasing number of Muslim students at our university,” said Bae Sun-hee, the school’s cafeteria manager. “Korean students who are interested in trying it visit the cafeteria as well.”

Sungkyunkwan University in Jongno District, Seoul, has also added some halal food items, which are about 1,000 won ($0.90) to 1,500 won more expensive due to the special ingredients used.

According to 2014 statistics from the Ministry of Education, 56.7 percent of the 84,891 total foreign students in Korea were from China, followed by Japanese students at 4.5 percent and Vietnamese at 3.7 percent.

The owner of a convenience store near one university in Seoul, surnamed Lee, has solely hired Chinese students as part-time workers for seven years due to the high demand for work among that demographic.

“As the number of Chinese students here has increased, they’ve shared information about part-time jobs in Korea in online community forums,” Lee said. “It’s actually easier for me to run the store since the Chinese students seek replacements by themselves when they quit.”

Some 61 percent of all foreign students come to Korea to obtain bachelor’s or master’s degrees, while the rest are seeking to learn Korean or participating in exchange programs.

“More foreigners are trying to learn Korean due to the Korean Wave,” said Park Bong-seo, the deputy director of the International Cooperation Bureau in the Education Ministry. “The globalization of Korean companies and the country’s enhanced national image resulting from the Korean Wave are factors behind the increase in foreign students.”

However, the increase in international students in Korea has also raised the potential for misunderstandings and conflicts in class, especially those taught in English.

“A lot of the foreign students are pretty passive in group projects because they’re scored on a pass-fail basis, so it’s relatively easier for them to gain credit compared to the Korean students,” said Shin Hyeon-jeong, a 24-year-old student.

“One Korean student in the same group as I omitted the data I prepared for our project without letting me know,” said Chae Ui, a Malaysian student. “That student then made me present a script prepared by another Korean teammate. I worked hard on reading and memorizing the script that I wrote in spite of my poor Korean, but it was no use. The Korean students just told me not to do anything, that I was useless.”

A 23-year-old university student surnamed Hong added that she had difficulty communicating and working with a Danish student in a class taught in English.

“One day, when we were discussing how to divide responsibilities for a group project with a Danish student, the student just walked out of the room, saying, ‘I’m sorry that I can’t speak Korean well. I’m a problem for this team.’”

Those sorts of barriers and frustrations have also extended outside the classroom, especially with more foreign students living in boarding houses run by Korean landlords.

Some international students said they had even experienced discrimination.

Jang Chan-woo, a 28-year-old university student, said when he was helping his Pakistani friend Usman look for a room, the owner of the apartment outright refused to sign a contract with him.

“The owner … was saying in Korean that [Usman] might be a member of the Islamic State [an Islamic terrorist group] and he might promote terror in his house,” he said. “It took nearly an hour to persuade the landlord that Usman was not that kind of a person - that he’s a Ph.D student - and to make up a contract.”

The Korean government is currently working to implement measures to attract more international students, which would mean expanding changes on-campus and off to accommodate the increase.

In July, the Education Ministry announced that Korea was planning to attract some 200,000 foreign students by 2023.

Steps for increasing the ratio of international students on college campuses include creating a customized educational curriculum for foreigners and increasing the budget for the Global Korea Scholarship program. The government hopes that attracting more students from overseas would be an economic boon.

Still, some have questioned whether those efforts will pay off.

“I’m doubtful about the government’s plan to increase the number of foreign students to 200,000 by 2023 without sufficient, feasible methods that can realize that goal,” said Lee Jong-gil, a representative from the Korea International Student Association.

“Despite the government and colleges providing foreign students with scholarships and student dormitories, limitations still exist in accepting them.”