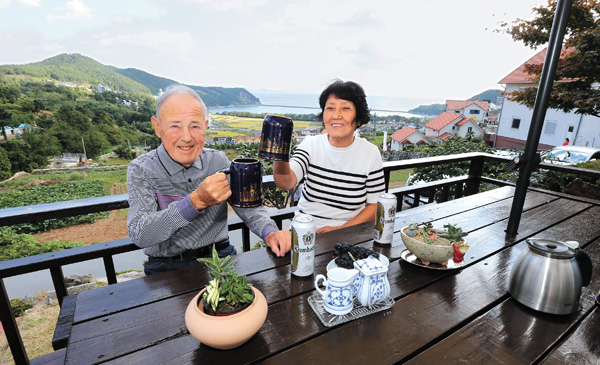 Yu Chun-ja, 77, who formerly worked as a nurse in Germany, and her 85-year-old husband, Wilhelm Engelfried, enjoy a beer on their balcony earlier this month in the German Village in Namhae County, South Gyeongsang.

Some 27 years have passed since the National Pension Service came into existence, but according to a recent JoongAng Ilbo survey, 95 percent of respondents believe that the payments granted are not enough to cover living expenses. 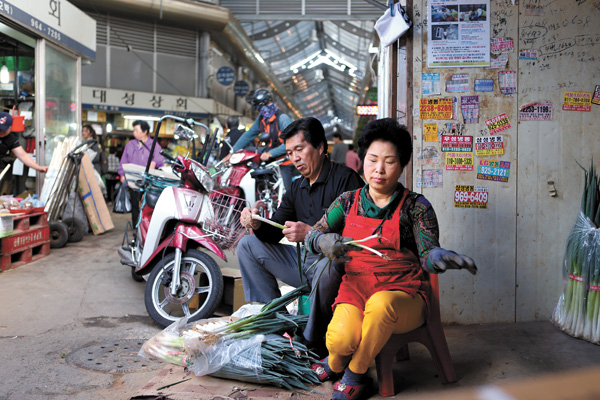 Yu Kyeong sun, 59, and her husband, Jeong Hyo seong, 61, peel scallions at Gyeongdong Market in central Seoul to make ends meet.Jeong receives a monthly pension of 430,000 won as of this year and Yu will receive 415,000 won in two years. [Song Bong geun and Cho Mun gyu]

Likewise, nearly 87 percent of people surveyed said that they either “strongly agree” or “generally agree” with the sentiment that “national pension can simply be considered as an allowance at the most.”

“There is no way the National Pension Service stipend can cover living expenses,” said Choi Hae-an, 62, a Busan resident. “I think it can be considered just as an allowance of sorts.”

Lee Jin-hyeon, 60, of Changwon, South Gyeongsang, shared the same sentiments. “It’s difficult to live off National Pension payments, so I’m earning a little bit by working on the side.”

Though Lee has contributed to the National Pension scheme for 25 years and now receives some 900,000 won per month, he says the sum is still insufficient.

Article 1 of the National Pension Act states: “The purpose of this Act is to contribute to the stabilization of livelihoods and the promotion of national welfare by providing pension benefits in case of old age, disability or death.”

Between Oct. 14 and 16, the JoongAng Ilbo conducted a survey to determine if the NPS was considered to be doing a good job and to collect public opinions on the scheme.

The overwhelming feedback was that the old-age pensions were simply considered “allowances,” and weren’t nearly enough aid in the cost of living for the decades post-retirement.

Only 364 people surveyed knew their average total expected monthly pension payment, around 630,000 won, which would cover only 29 percent of the amount for living expenses.

The National Pension Research Institute estimated that the income replacement rate, or the pension rate in relation to the estimated lifetime average income, should have been 46.5 percent this year, based on whether a person subscribed for 40 years, though the actual replacement rate was 24.2 percent. This is expected to stay at around 24.8 percent in 2020, then continue to drop to 23.3 percent in 2030 and 20.4 percent by 2050.

Of the people surveyed, 42.3 percent said that they relied on savings after retirement to contribute to their living expenses, while 41.5 percent said they found other work.

Choi said his monthly living costs were around 1.5 million won, only 26.7 percent of which is covered by the national pension. To cover the rest of his expenses, he works in delivery, driving a one-ton truck.

Likewise, Lee said his monthly pension payment covered 45 percent of his living expenses; he currently works at a small company.

By contrast, 77-year-old Yu Chun-ja, a former nurse, and her 85-year-old German husband Wilhelm Engelfried receive a combined pension payment of 3,400 euros ($3,748) per month from the German government.

Yu described that they are “living plentifully.” The two reside in the German Village in Namhae, South Gyeongsang.

Yu Gil-ja, 70, who also worked as a nurse in the 1960s and 1970s in Germany, where she met her German husband, has made contributions to the German pension system since 1966. She now receives 1,550 euros per month. Together with her husband, they live off of 3,550 euros per month.

“The German system is one where if you regularly pay a high contribution, you will be given a much higher payment later on,” she explained.

She referred to the German social security system dating back to 1889, as “pay-as-you-go,” in which contributors can expect greater returns.

According to the domestic NPS, Koreans received an average monthly old-age pension payment of 345,700 as of July, while Germans could expect on average three times as much, at around 980,000 won last year.

“Germany is also lowering income replacement rates and seeking financial stability by increasing contribution rates,” said Yun Seok-myung, a researcher with the Korea Institute for Health and Social Affairs. “We need to be serious when considering raising contribution rates, and the income ceiling should be raised to 6.5 million won [up from 4.21 million], while retirement age should be increased to 65.”