Local golf looks to dig out of the financial rough

Local golf looks to dig out of the financial rough 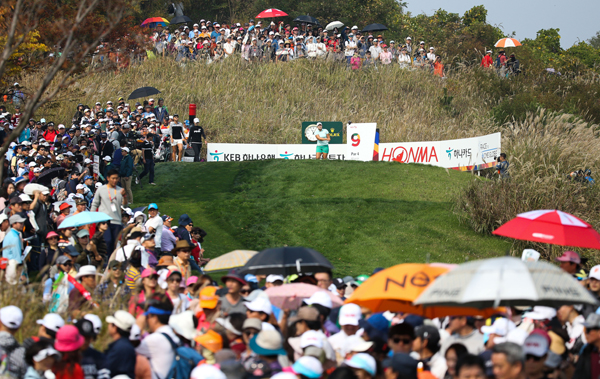 While the excitement of the Presidents Cup and the LPGA KEB-Hana Bank Championship in past weeks has boosted the popularity of the game in Korea, players on the men’s professional golf tour are hoping to follow through on the momentum.

The KPGA Korean Tour has only 12 events this year with a combined total purse of 8.4 billion won. This is less than half of what KLPGA Tour offers. The women’s professional golf tour has 29 events with a total of 18.4 billion won in prize money.

To afford to play a full season, which is estimated more than 50 million won a year, male golfers need to finish at least in the top 50 in prize money earnings. To make extra money for living costs, they need to be in the top 25.

The financial gap between male and female players can also be found in sponsorship deals. In women’s golf, a player can get sponsorship easily if they have the tour card for the first division. But in men’s golf, even Kim Seung-hyuk, last year’s top prize money winner, didn’t have a main sponsor.

For these reasons, the KPGA Korean Tour is not as popular as it used to be. Even top players are turning their back on events.

For the KPGA Championship, a major event that was held in August, top local golfers such as Kim Kyung-tae, Lee Kyoung-hoon, Moon Kyung-joon and Park Sang-hyun did not sign up. Instead, they went to play for the Japan Golf Tour Organization event.

Today, male golfers are finding their own way to survive. Teaching amateurs is a basic route, while others are taking part in virtual screen golf events to make money. Players like Kim Min-seok and Kim Min-ho have said that they competed at the indoor golf tournaments to make money.

The men’s tour had its heyday in the 2000s when it had some 20 events in the season. But with a power struggle inside the KPGA for president, and some golfers’ arrogant behavior, fans turned away.

Now, young golfers are trying to get friendlier with fans and be more approachable. They wrote letters to people who participate in the pro-am event, and give autographed caps and golf balls to lure fans to the field.

“I know I have to step up first to communicate with fans, but that’s still not easy for me,” said Kim Dae-sub who has 10 career victories in the tour. “Sometime I feel awkward meeting fans because since the tour has been shrunk we don’t have many opportunities to meet them.”

Golfers have vowed they will get closer to fans and try to improve relations. “There are golfers who are still shy to communicate with fans because of the tour’s environment,” said Kim Dae-hyun who won the Maeil Dairy Open on Sept. 6. “Players are discussing how to improve the situation.”

To attract more fans, experts point out that men’s golf also needs a big star and a tight race. In the women’s side, players like Chun In-gee, who is currently money leader in the KLPGA Tour with five victories, and Lee Jung-min and Park Sung-hyun, who both have three wins, are in a tight race to become best player of the season. ?

There may be a hopeful sign at the Shinhan Donghae Open in late September. According to organizers, some 24,000 fans visited Bear’s Best Cheongna Golf Club in Incheon during the tournament, but this was mainly because top Korean golfers were making rare appearances on the domestic tour.

An Byeong-hun, who plays in the European Tour, and Noh Seung-yul, who is based in the U.S. PGA Tour, were among the top golfers at the Shinhan Donghae Open. For An, who won the event, it was his first event since April 2012 in front of local fans.

Young golfers like Lee Su-min, who won the Gunsan CC Open in June, and Lee Chang-woo know they have to help revive the popularity of the tour, but with only 12 events in the season, they know it isn’t an easy job.

“Our priority should be showing different and better performances to the fans,” said Lee Su-min.