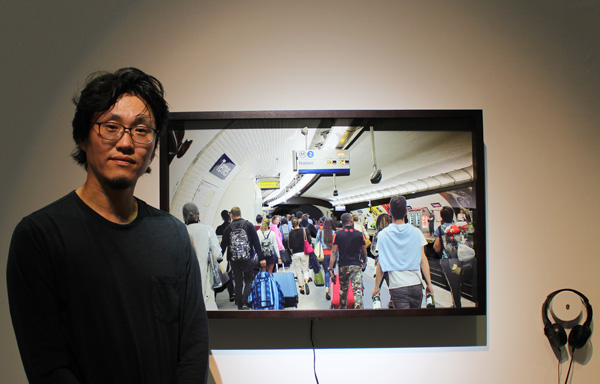 Korean artist Yeondoo Jung poses on Saturday beside one of his eight photo collages detailing the personal histories of immigrants at the Musee d’Art Contemporain du Val de Marne in the commune of Vitry-sur-Seine southeast of Paris.[MOON SO-YOUNG] 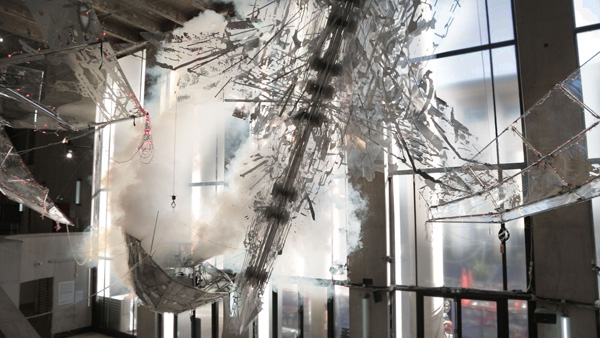 
PARIS - Several important Korean contemporary artists are holding solo exhibitions in Paris and other cities across France, as part of the “Annee France-Coree 2015-2016,” a series of cultural events celebrating 130 years of diplomatic ties between the two countries. 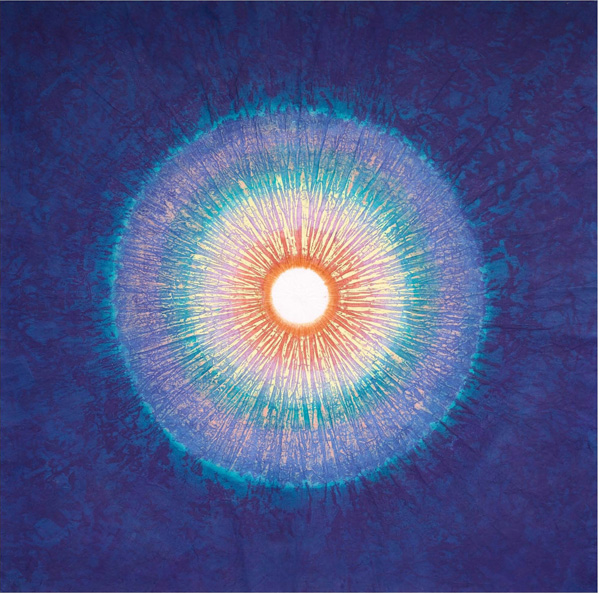 Among them, Yeondoo Jung’s solo show titled “D’Ici et d’Ailleurs” or “Here and Elsewhere” corresponds surprisingly well with the events because the exhibition focuses on relations and exchanges, based on the artist’s interviews with some immigrants in a French town.

The exhibition started on Saturday at the Musee d’Art Contemporain du Val de Marne in Vitry-sur-Seine, a commune in the southeastern suburbs of Paris. It runs through March 6.

The show consists of eight pieces of multilayered photo collage, each of which carries one immigrant’s story. A speaker and headphones attached to each of the works allow the viewers listen to the immigrant’s voice. Jung created them after he met with more than 30 immigrants from the Democratic Republic of Congo, Ivory Coast, Tunisia and other countries as well as from Korea in Vitry-sur-Seine during his one-month residency program at the museum last year.

“I asked them about what their expectations were when they left their homelands and what the realities they faced were once they had migrated here,” said the 46-year-old artist, who is well-known for his early photographic project about ordinary Koreans’ dreams and realities.

For example, an excerpt from the English translation of the artist’s interview with Guy Kalafai from the Democratic Republic of Congo reads, “Before I came here, I imagined France as a colorful country where everything would be beautiful ... especially the women. I didn’t think there could be problems here, problems such as unemployment. I could never have imagined that.”

Jung’s photo collage about Kalafai’s story, accordingly, includes many photos of women, as well as those of female statues and buildings in France. The photos are meticulously cut and arranged in 11 layers to form a collage image with depth.

“I’m dealing with each person’s history that has accumulated over time,” the artist explained. “It is difficult for an image of one flat surface to have the depth of the time. While looking at the many layers of images in my photo collages, viewers will come to discover details, and such details will help them actively imagine the immigrant’s personal history.”

“It is also true for myself,” the artist continued. “Cropping details of the photos for the collages - a very tedious work process that takes a long time - I read again and again the English translations of their interviews [in French] to imagine their personal histories.”

Among the other artists participating in the “Annee France-Coree 2015-2016,” Lee Bul is presenting a large-scale installation work titled “Aubade III” at the Palais de Tokyo in Paris until next October. The work, which was previously on display at the central Seoul branch of the National Museum of Modern and Contemporary Art (MMCA), is inspired by monuments and vehicles of the early 20th century, such as the Hindenburg airship. At regular intervals, a fog surrounds the piece while its LED lights flicker.

And the Cernuschi Museum in Paris is holding the “Korean Artists in France” exhibition until Feb. 7, showcasing Korean modern artists who have worked or are still working in the country. Some 60 works from the collections of the Cernuschi Museum, Korea’s MMCA and the Lee Ungno Daejeon Museum are on display.

The artists include Kim Whanki (1913-74), one of the most important Korean abstract painters; Ungno Lee (1904-89), the pioneer of abstract art based on East Asian calligraphy; and Bang Hai Ja, 78, who creates abstract paintings about light and is still active in Paris.

In the Lille, “Seoul, Vite, Vite!” is taking place through Jan. 17, featuring the works of hot Korean contemporary artists to show off the country’s energetic and dynamic qualities. The title of the exhibition contains the French translation of an expression frequently used in Korea, “bbali, bbali,” which means “quickly” or “hurry up.” Participating artists include Choi Jeong-hwa, Do Ho Suh and U-ram Choe.