Kimsooja explores the boundaries of painting

Kimsooja explores the boundaries of painting 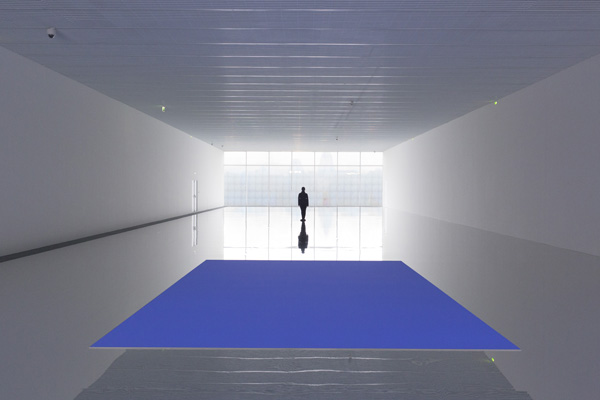 Korean artist Kimsooja stands in a gallery of the Centre Pompidou Metz in northeastern France. The projected color field and the mirror floor are part of her “To Breathe” project, which transforms the entire gallery space into a three-dimensional painting, constantly changing depending on the light. The exhibition runs through Jan. 4.[JAEHO CHONG/INSTITUTE FRANCAIS AND KUKJE GALLERY]

METZ, France - The Centre Pompidou Metz is a young museum that opened five and half years ago, in the French city of Metz near the German border with a tumultuous history going back thousands of years. 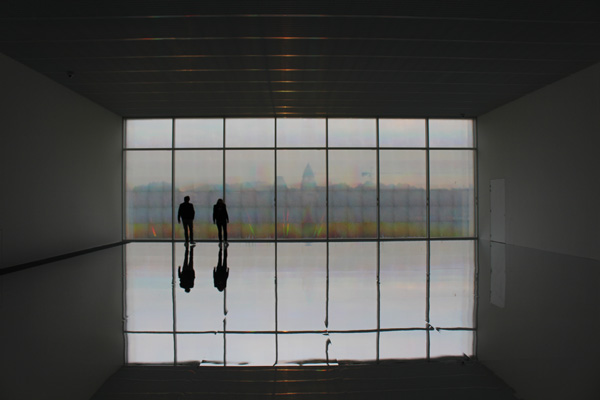 The landscape of Metz, blurred in iridescent light as seen through the windows that the artist covered with sheets of diffraction grating film, is also part of the “To Breathe” project.[MOON SO-YOUNG]

Its unique design by architects Shigeru Ban and Jean de Gastines as well as its novel exhibitions have helped this branch of the national modern art museum become one of the new must-see spots among art lovers. 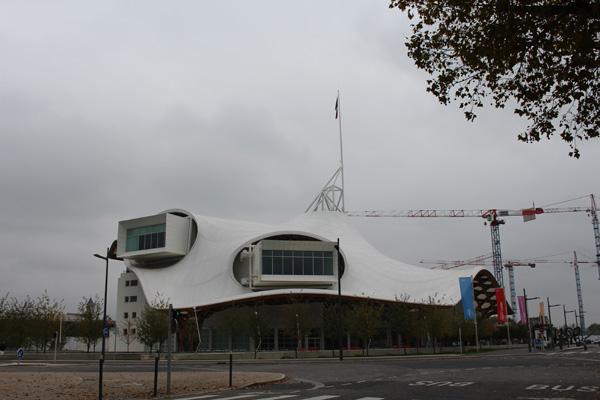 Now, in a rare case, the Centre Pompidou Metz has offered the entire space of one of its three galleries to one artist: Korea’s Kimsooja. The result is the “To Breathe” exhibition, which opened Monday and runs through Jan. 4.

Visitors to the exhibition in the daytime have an unimpeded view of the 80-meter-long gallery filled with soft natural sunlight coming through the windows on either end of the room, which the artist covered with sheets of diffraction grating film. The iridescent light filtered through the sheets is reflected on the floor, which the artist has transformed into water-like mirrors. And the sound of breathing - actually the overlapping sounds of the artist’s inhalations and exhalations - fills the gallery space.

In addition to the sound, a large color field is projected onto the middle of the gallery floor that constantly shifts in color. In the daytime, the color field, overwhelmed by sunlight, looks like just a large piece of colored paper spread on the floor. But as the sun goes down and the light coming through the windows weakens, the color field begins to spread to the ceiling and adjacent walls.

“I want to spend hours here,” said Emma Lavigne, director of Centre Pompidou Metz. “We know that people stop just for a couple of seconds in front of paintings. But this art project leads viewers to spend hours, even a day, in it, perceiving the changes of the space depending on what time it is and what season it is.”

“In addition, it’s a kind of re-reading the art history of painting,” she continued. “This project has a painterly quality. It is strongly connected to the questions about color fields in the monochrome [painting] adventures made by such artists as Yves Klein and Kazimir Malevich. Instead of putting a painting on the wall, Kimsooja let the viewers enter into a space that is like a monochrome painting.”

“My work is a kind of three-dimensional painting,” the artist said, in accordance with Lavigne’s view. “My art started with paintings. The Metz project is an experiment on where is the limit or border of paintings.”

The 58-year-old artist pointed out that the color field projected onto the floor looks like a pigment-covered sheet of paper in the daytime, framed by the sunlight coming through the windows, but that the color begins to invade the adjacent space when the sunlight weakens. “I’ve always been curious about where the real surface of paintings are.”

She added that the interaction between the natural sunlight from the outside and the artificial light from the projected color field is also related to her longtime interest in breathing, which consists of inhalation and exhalation, and sewing, which crosses borders between the inside and outside.

Furthermore, the installation is reminiscent of bottari, the artist said. Bottari are Korean traditional cloth bundles used to carry belongings, which Kimsooja has been using in her art for decades. Bottari are flat when spread out, but become three-dimensional when bundled up, much like the artist’s “three-dimensional painting” in Metz. And bottari create a very flexible boundary between inside and outside.

And just as Kimsooja’s art explores the concept of boundaries, the Lorraine region of France, of which Metz is the capital, has often seen its borders change throughout history, alternately becoming part of Germany and France, according to Lavigne.

Kimsooja, one of the best-known Korean artists in the international art world, won fame with the 1997 performance and video piece “2,727 Kilometers Bottari Truck.” For the work, she traveled throughout Korea for 11 days on a truck loaded with bottari. She presented the bottari truck at the 1999 Venice Biennale’s main international exhibition. Recently, she represented Korea at the 2013 Venice Biennale with a different version of the “To Breathe” project.