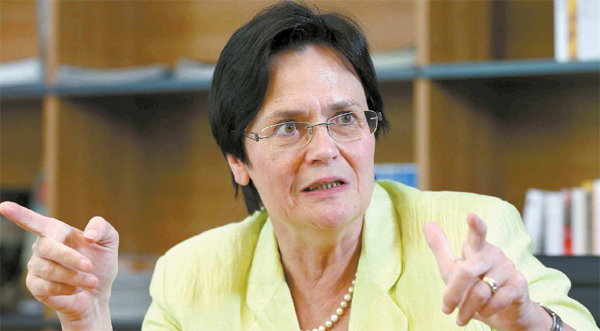 Christine Lieberknecht, the former prime minister of Thuringia, a federal state of Germany, visited Seoul on Oct. 12 to attend an academic conference hosted by the Konrad Adenauer Foundation to celebrate the 25th anniversary of German unification.

Lieberknecht is a living witness to the issues East Germany faced during unification and how the country has prospered since.

The former prime minister majored in theology at Friedrich-Schiller-University Jena and, prior to unification, participated in an anti-establishment movement in East Germany.

She went on to be elected deputy leader of the German Christian Democrats in 1990, and later served as the prime minister of Thuringia from 2009 until last year.

Kim Young-hie, a senior columnist for the JoongAng Ilbo, an affiliate of the Korea JoongAng Daily, recently sat down with Lieberknecht to discuss German unification and her experience. The following is an edited excerpt.

A. I was attending a party conference to elect the leader of the German Christian Democrats of East Germany. When I came out of the conference room, people were whispering that the Berlin Wall had fallen. Although I was curious about what they were saying, I just went back home because my family was waiting for me. My husband told me what happened.

The wall reportedly fell down because of a government spokesman’s slip of the tongue. Is it true that East and West Germany unified by chance?

I don’t think so. The East and the West were able to unify because every European country had already expected and prepared for it. The border between Hungary and Austria, which already opened in late August 1989, and Perestroika, a political reformation led by Gorbachev [the leader of the Soviet Union], served as accelerators to boost Germany’s unification. The most decisive factor was the Soviet Union asserting that it would no longer support the East German government anymore.

When you heard about the collapse of the wall, did you realize that a new page in German, European and world history would begin?

Everyone shouted, “We all belong to one nation,” and jumped over the wall. Because Germany was unified at an unexpected moment, Germans remember that day as the most impressive day of their modern and contemporary history. Even after the country’s unification, many Germans have visited the place where the wall was located to remember.

If there comes an opportunity for the Korean Peninsula to unify as Germany did in 1989, North Korean government officials and military authorities will likely resist it in order to retain their vested political interests. Didn’t East Germany’s elite, especially the military and high-ranking officials, resist unification?

The Soviet Union did not support the East German government’s oppression of civil revolutions. Gorbachev quoted the proverb, “Life punishes the latecomer,” to urge the East’s reformation. Members of the Communist Party also raised their voices to change the East’s political system. After hundreds of thousands of people participated in peace protests in Leipzig, East Germany ... the country’s high-ranking officials could not help but accept unification without resisting it.

East German soldiers, the police and even officials in education institutions were judged by a screening committee to be reemployed. The degree of personal fault and participation in the Stasi was part of the judgement standard. Some people were reemployed because there was no way to verify their faults. The process of reemployment was highly complicated, and many Germans still suffer from it.

At that time, many East German residents participated in protests, carrying candles and shouting, “We belong to one nation.” Were there any East Germans who revolted against the protest because their vested interests were threatened?

Hundreds of thousands of people in Leipzig and a million in Berlin participated in the protest. Although not everyone in East Germany took part, the protest was still the biggest one ever, and its message was very clear. The fact that two-thirds of Germans voted in the free election held in March 1990 also proved that most of the East German people wanted unification.

German Prime Minister Angela Merkel met Korean President Park Geun-hye in March 2014 and said that Germany’s unification was a “glucksfall,” which means “good luck” in German. Why is that so?

Merkel described the unification of Germany as good luck because a number of events required for unification happened simultaneously. Internal and external politics started to change to successfully unify the two Germanys. Moreover, there were many courageous people who were crying out for freedom and peace.

Moreover, the West German government gained confidence within international society thanks to its policies, which were perfectly adept for the situation in Germany at the time. Since these simultaneous changes brought about the unification of Germany in such a short time, they were worthy to be called “glucksfall.”

Don’t you think the civil revolutions in East Germany, Poland, Hungary and the Czech Republic, and Gorbachev’s diplomatic policies would be overlooked if “glucksfall” was highlighted too much?

It cannot be denied that many incidents, required for the unification, brought good luck to Germany as they happened at the right time. If anyone had been shot during the protests or if something had gone wrong, the country’s unification could not have been achieved. Thus, it is unprecedented luck in the modern and contemporary history of Germany and in the world as well.

You said, “Everyone related to the protest encountered legal stability on the way to the unification of Germany.” What does that mean?

I would like to refer to Immanuel Kant’s phrase, “Treaty is a necessary condition for perpetual peace.” In order to maintain peace, treaty or unbiased rules made by both sides should exist. In unified Germany, the country’s relationships with other countries as well as protecting individual rights - their property and pension - were considered important. So Kant’s words would indicate it was important for the East and the West to strictly follow the unification treaties signed between them.

Do you think Germany succeeded in social unification, so far as to say that “Ostalgie,” the German word to refer to nostalgia for life in East Germany, has faded?

I feel bad about words like Ostalgie, Besser-wessi [an arrogant West German], and Jammer-ossie [a grouchy East German]. I think those words result from prejudice and bad teaching. Unification proceeded rapidly by the West German elites, and therefore, internal barriers between people from the East and the West still existed even after the unification. However, through establishing cooperative companies and conducting cooperative research, the country was able to break down these internal barriers.

Merkel has succeeded in serving three consecutive terms as chancellor. What made the conservative government maintain its power and social democracy decline?

Politicians should concentrate on coming up with proper policies for the present. Left-wing parties place priority on the nation and the group over the individual. By contrast, the Christian Democratic Party considers both the freedom of the individual and solidarity important. I think the Christian Democrats’ political leanings allow the party to be the public’s choice.

On Sept. 22, Merkel made a surprise appearance at historian Gregor Schollgen’s launch of his biography on Gerhard Schroder, the former Social Democratic chancellor. Merkel complimented Schroder’s economic and welfare reform, Agenda 2010, and said the reform resulted in Germany’s success after unification. Her compliment seemed strange but enviable from Korea’s point of view. Is that an ordinary occurrence in Germany’s political arena, or was it a surprise show?