The secret to home-grown talent

The secret to home-grown talent 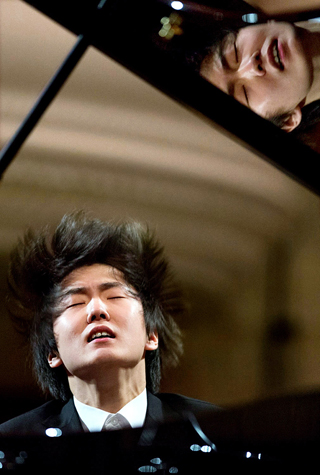 
In this year’s Chopin competition, Cho Seong-jin was the overwhelming winner. He seemed to be the only one who didn’t realize his name would be called when the first place and gold medals were announced. The eyes of Charles Richard-Hamelin, who won second place, and other contestants were on Cho as if to concede to his skill.

The grand tradition of the Chopin Competition is to have the masters detect outstanding talents. In 1960, Maurizio Pollini won the competition unanimously. Arthur Rubinstein, arguably the best pianist of the 20th century and a member of the jury, said, “That boy can play the piano better than any of us.”

In 1975, Krystian Zimerman swept the event, winning first place as well as the special prizes. When Yundi Li asked Zimerman if he could become his pupil, Zimerman heard Li play once and turned him away - there was nothing more to be learned. In 2000, Yundi Li won the Chopin Competition unanimously. This year, the jurors who had won the competition recognized genius in Cho. Martha Argerich, who won in 1965; Dang Thai Son, the 1980 winner; and Yundi Li gave Cho the highest marks.

Cho is a pianist born and raised in Korea. Siblings Chung Myung-hwa, Chung Kyung-hwa and Chung Myung-whun went abroad for musical training when they were between 10 and 16. Sarah Chang was born in the United States, and Chang Hanna went to the United States at age 11. Lim Dong-min and Lim Dong-hyuk, brothers who shared the third place in 2005 Chopin Competition, went to Russia in their early teens as their father was posted there.

But things have changed lately. World-class pianists Son Yeol-eum and Kim Sun-wook went abroad well past 20. Cho went to France in his junior year of high school after his musical style had been established in Korea. I called Cho’s father to inquire about his childhood. But the father simply said, “It was what my son did all by himself, so please don’t link family background with his success.”

I couldn’t shake off curiosity, so I asked a friend whose son was a peer of Cho and majors in piano at Julliard. “I’ve known Seong-jin since he was 11, and he was at a different level from other so-called prodigies. He has always been an outstanding player. His parents were worried that he may be autistic because he didn’t start talking until he was four. But he played piano for six to eight hours a day. Seong-jin was a genius who pushed himself.”

But Korea’s eyes and ears have become so sensitive that no musical talent will go undiscovered. Sunchon National University’s Professor Park Sook-ryeon taught him personally since he was nine, and Seoul National University Emeritus Professor Shin Soo-jeong joined in the first year of middle school. When Cho was 16, Seoul Philharmonic Orchestra’s artistic director Chung Myung-whun had him perform with the orchestra three times. Chung Kyung-hwa introduced him to a “Chopin specialist” for personal lessons. The musical ecosystem in Korea has become far richer, and Cho Seong-jin’s triumph is the fruit from it.

The day after the Chopin Competition, the Blue House called the Presidential Advisory Council on Education, Science and Technology meeting. President Park ordered that world-class researchers be nurtured so that Korea can finally win a Nobel Prize. But the case of the Chopin Competition suggests that the science ecosystem needs to be reviewed.

Many science-focused high schools have been founded, and KAIST and POSTEC have been established. The talented students trained there go to medical and dental schools, because people who compete doctoral programs in science or engineering in Korea are not respected. The post-doctorate programs pay meager salaries. The result is a brain drain, and a country ranked 15th when it comes to attracting the best and brightest from around the world.

Japan, on the other hand, has become the “country of Nobel Prizes,” and it is a tradition to have the most brilliant students to complete graduate program at Japanese schools. There are fewer Japanese graduate students in the United States than Koreans. Upon completion of a degree program, Japan provides generous support for post-doctorate programs to allow researchers to pursue their projects at world-class institutions. As the top brains return to Japan, its science eco-system becomes richer. This may be the reason Korea hasn’t won the Nobel Prize, while no Japanese pianist won the Chopin competition.