Kakao confirms its eyes are on O2O services

Kakao confirms its eyes are on O2O services 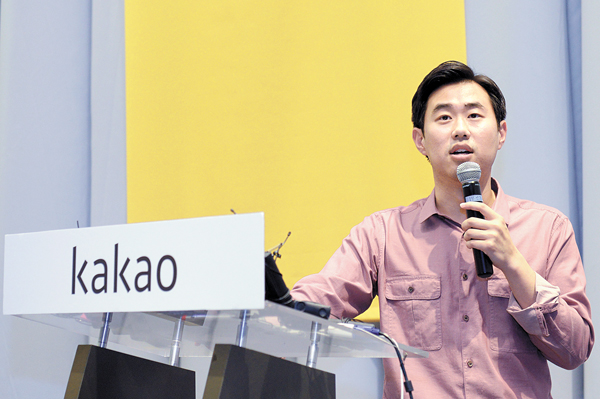 JEJU CITY, Jeju - Kakao, the operator of the nation’s most popular mobile messenger KakaoTalk, announced on Tuesday that it is strengthening its focus on connecting mobile users with existing offline services, often referred to as offline-to-online (O2O) services.

“The past couple of years were spent on seeing existing PC services migrate to mobile,” said Jimmy Rim, also known as Rim Ji-hoon, the new CEO of the company, at its Jeju headquarters. “Now it’s high time we see O2O blossom.”

The burgeoning O2O services field refers to retailers and service providers partnering with mobile companies to improve the experiences of shoppers and users. Fields range from mobile content and gaming to advertising and finance, and the CEO, who took the helm one month ago, said Kakao is mulling “every field imaginable.”

The conference came a week after the company unveiled its premium taxi-hailing service Kakao Taxi Black, the second in a series of O2O services Kakao has been pursuing.

The company’s first O2O venture was the original Kakao Taxi, an Uber-like app that debuted in March.

Asked whether the company is still interested in global expansion given its sluggish performance overseas in recent years, Rim admitted that KakaoTalk has failed to do well outside of Korea.

Rather than pushing the app that’s already so popular at home, Rim indicated that the company would instead find other mobile opportunities in Southeast Asia, where smartphone users are still on the rise.

“We are in the middle of reinterpreting the definition of globalization and plan to come up with services custom-made for respective countries,” he said.

Since merging last October with Daum Communications, the nation’s second-largest portal site operator, Kakao has undergone a string of changes. Rim was named to replace the former two co-CEOs in August, and Daum Kakao, the name after the merger, was renamed Kakao in September.

During the one-month period between his appointment and inauguration, Rim had 30-minute one-on-one talks with 100 employees who shared their ideas and problems with him, an indication the young leader wishes to shun Korea’s typical hierarchical corporate culture.

During the conference, he said he sees himself as a person with a knack for identifying qualified people and believes listening to workers is the best way to understand a company.

To that end, Kakao named an experienced engineer as head of the People & Culture Team, a new organization, so that developers and managers can feel free to pitch innovative ideas.

A graduate of Korea’s top science-and-technology university Kaist, Rim is the founder and former CEO of K Cube Ventures, a venture capital firm and affiliate of Kakao.