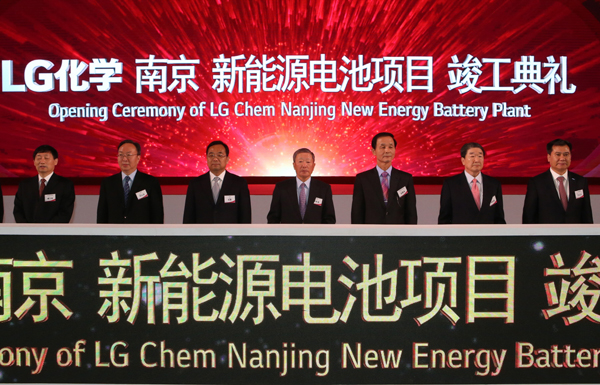 LG Chem has completed the construction of its plant in Nanjing, China, that can produce 50,000 electric vehicle (EV) batteries annually. 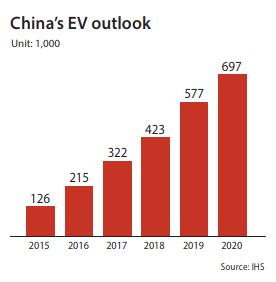 “Completing this Nanjing plant, the company has made another meaningful step in China, which has the world’s biggest EV market,” said President Kwon Young-soo, who oversees the company’s battery division. “We will focus on making the Nanjing plant the world’s core EV battery production base in the future.”

The company announced the completion of the plant on Tuesday. The three-story factory was built on 25,000 square meters (269,097 square feet) of land to make high-performance EVs that can run 320 kilometers (199 miles) on a single charge. The company aims to expand the plant’s capacity to 200,000 units by 2020, which will lead to 1.5 trillion won ($1.3 billion) in revenue and boost its global market share to 25 percent.

The company has already won contracts to produce 1 million EV batteries for some of China’s biggest automakers, including the country’s No. 1 Shanghai Automotive and No. 2 Dongfeng Commercial Vehicle.

The company expects to increase its global market share as it can now produce EV batteries in three different countries - Ochang in Korea, Michigan in the United States and in China, with a total production capacity of 180,000 units per year.

To respond to market demands quickly, the U.S. and China plants will focus on supplying their own countries, while the Ochang plant meet overall production volume.

LG Chem said it will consider building a plant in Europe where demand for EVs is increasing.

The company’s market strategies were led by LG Group’s Chairman Koo who took samples of rechargeable batteries on a business trip to the United Kingdom in 1991.

He also visited the Michigan plant’s groundbreaking ceremony and the completion ceremony for the Ochang plant in North Chungcheong.