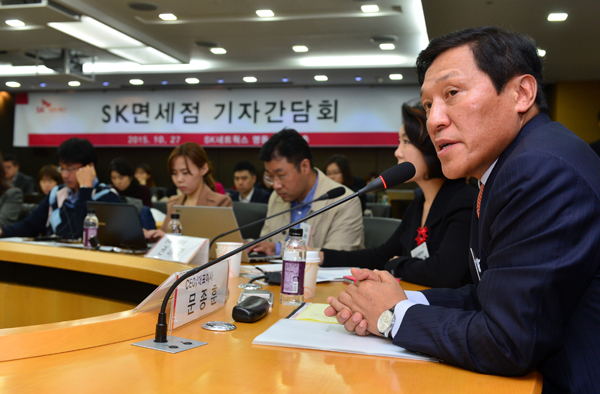 SK Networks, the duty-free shop operator of SK Group, has unveiled its plan on how it will continue to run the existing shop if they succeed in renewing the license.

The Korea Customs Service is currently reviewing four duty-free shop licenses, as they are due to expire. The announcement on the successful operators is expected early next month.

SK said their duty-free shop will contribute to the local economy and build a tourism belt that connects the company’s Walkerhill Hotel, the Dongdaemun neighborhood in eastern Seoul and Pyeongchang, Gangwon.

The project dubbed East Seoul/East Korea is designed to foster tourism in what the company considers to be the untapped eastern regions.

The company has earmarked 820 billion won ($725 million) to carry out the plan. Of the investments, 240 billion won will be used for funding charity activities or supporting local merchants.

Along with the tourism project, the company pledged to operate the duty-free shop until 2:30 a.m. to serve late-night shoppers and tourists.

SK, which says it will donate 10 percent of its operating profit to society, is the latest operator to pitch its plan to preserve its lucrative business.

The business is crucial at a time when retailers see sluggish sales at department stores and big discount chains.

Also on the defensive is Lotte Duty Free, which runs two shops in Seoul. Lotte also unveiled a plan last month that pledges to bring an additional 12 million tourists to the area by 2020.

Lotte Duty Free is desperate to make sure that the licenses are reissued. To court good public relations, Chairman Shin Dong-bin launched a new unit aimed at nurturing startups amid a prolonged family dispute over control of the group.

Shinsegae and Doosan Group have thrown their hats into the ring.

Shinsegae DF, a Shinsegae unit in charge of running the duty-free business, said on Monday that it will invest a total of 270 billion won through 2020. The investment will mainly go towards attracting tourists and forging partnerships with local merchants, particularly those working at Namdaemun Market in central Seoul.