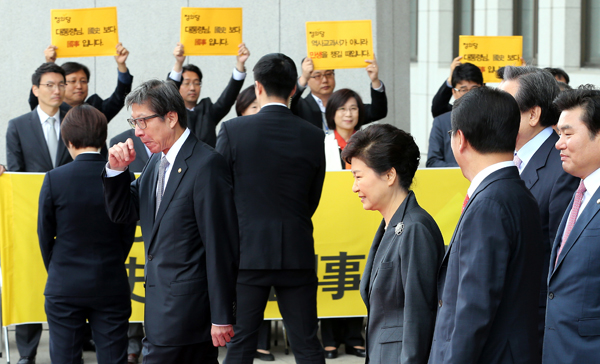 President Park Geun-hye leaves the National Assembly after a speech on Tuesday, as lawmakers from the minority opposition Justice Party stage a protest to criticize her decision to restore state control over history textbooks. [JOINT PRESS CORPS]

President Park Geun-hye made a strong appeal to the public to support her decision to restore state control over history textbooks, rejecting criticism that she is trying to whitewash controversies over her late father, strongman Park Chung Hee.

Park addressed the nation Tuesday morning as she delivered a speech on state affairs at the National Assembly. The annual speech was intended to explain the government’s budget, but Park used it to justify her decision on history textbooks.

“For the sake of Korea’s future, to prepare for unification and to play a leading role with a strong national identity amid rapid changes in international affairs, normalizing history education is a responsibility and a mission for our generation,” Park said. “Correcting history cannot be - and must never be - subject to a political fight.

“Some have expressed concerns that the state-published history textbooks may distort or sanitize history, but I will never allow it,” Park said. “There must be no more confusion about textbooks that have not even been drafted yet and about something that will not happen.”

The Park administration and the ruling Saenuri Party have been at odds with liberal opposition parties, including the New Politics Alliance for Democracy (NPAD), for weeks over the government’s plan to restore state authorship of history textbooks.

The conservative ruling party largely supports the change, but liberal opposition lawmakers said Park was trying to glorify her late father, calling him a collaborator with the Japanese colonial government and a dictator.

In the speech, Park made clear that she has no intention of backtracking on the plan.

Many historians said they want to have nothing to do with state-penned textbooks, and public sentiment is deteriorating, according to opinion polls.

At the end of her 41-minute speech, Park made a direct appeal to the nation to support her campaign “in order to establish a correct historical perception and national view for youngsters and to prepare for unification and the future.”

While most of the speech was about the government’s proposed budget for next year, she devoted the final minutes to the history textbook issue, using a more urgent tone.

The speech was televised live, and NPAD lawmakers staged a protest inside the main chamber. Earlier in the morning, the NPAD considered boycotting the session, but decided to attend and stage a protest in front of Park.

Some lawmakers placed signs with the slogan, “No to state control of textbooks,” on the monitors of their desks facing the president. Some lawmakers also brought current history textbooks and opened them during Park’s speech.

Before Park’s speech, National Assembly Speaker Chung Ui-hwa asked NPAD lawmakers to remove the protest printouts, but the opposition party refused. Due to that discussion, Park’s speech was delayed 15 minutes.

Before the speech, Park had a closed-door meeting with leaders of the legislature, including the National Assembly speaker, Saenuri Chairman Kim Moo-sung and NPAD Chairman Moon Jae-in for about 20 minutes.

The ruling party praised Park’s speech. “The president made clear what I wanted to say to the people and to my fellow lawmakers,” Saenuri Chairman Kim said. “The contents were great, and I think it was a great help for us to set the direction for our next move.”

“She failed to provide any answer to people’s livelihoods,” NPAD Chairman Moon said. “She didn’t have any reflection on her government’s failed economic policies and incompetence.

She was just blaming the situation and other people.”

“Park is fueling the split in public sentiment by insisting on state-published history textbooks,” Kim Young-rok, NPAD spokesman, said, adding that it was Park who turned education into a political issue.

The NPAD’s Kim also condemned the Blue House for inviting 80 members of conservative groups to the National Assembly as observers.

“It is extremely rare for outsiders to observe the president’s budget speech,” Kim said. “The Blue House appeared to be mobilizing them for its textbook campaign.”

Earlier in the morning, a senior presidential official said the observers made a request to attend the speech, and it sought the legislature’s cooperation to arrange the visit.

Kim said that NPAD lawmakers would hold a rally in Gwanghwamun Square in the evening, making clear that it will take protests over the textbook issue to the streets.

The NPAD’s street rallies will continue until the Education Ministry’s deadline to gather public opinion on the new textbooks on Nov. 2.

Meanwhile, the ruling party demanded that Deputy Prime Minister and Education Minister Hwang Woo-yea be sacked over his handling of the history textbook project.

Saenuri lawmakers loyal to Park have expressed their frustration with Hwang for his lack of enthusiasm for the textbook campaign.

Asked about the pressure on Hwang on Tuesday, the Saenuri chairman said, “Doesn’t he deserve such a demand?”

“When you want to handle a sensitive issue like state-published textbooks, the party and the government must coordinate strategy closely, but we felt frustrated to see the Education Ministry’s handling on the issue,” a Saenuri lawmaker complained.