Artist’s kin shut out of her demise

Artist’s kin shut out of her demise 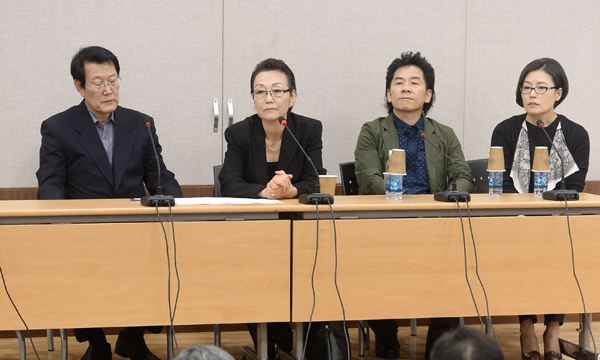 Sumita Kim, second from left, the second daughter of the late artist Chun Kyungja(1924-2015), asks Seoul to arrange a memorial so that people can bid a proper farewell to her mother, who passed away in early August.[NEWSIS]

Relatives of the artist Chun Kyung-ja, a towering figure in the Korean art scene whose death in August was only confirmed last week, said they learned of the death when a bank contacted them to confirm the closure of her bank account earlier this month.

At a hastily-arranged press conference on Tuesday at the Seoul Museum of Art (SeMA) in central Seoul, the relatives said they want some answers from the artist’s eldest daughter, Lee Hye-seon - including where her remains are.

They explained that they lost contact with eldest daughter Lee in April, and said they hope the city of Seoul will arrange a memorial service so people who loved and respected Chun and her works can pay tribute.

“My mother was a passionate woman,” Sumita Kim said. “What breaks our hearts the most is that nobody - the people that loved my mother and the Korean society that loved her - is given a chance to mourn her death [and say goodbye].”

The relatives said that given the contributions Chun made to the Korean art world, it was only right that the city “give her respectful treatment with class and dignity.” They emphasized that she donated 93 of her works to SeMA and that she cherished each of her works like her own child, even talking to them.

It was only on Oct. 23 that Korean media learned from SeMA officials that Chun had passed away in August and that Chun’s oldest daughter Lee visited the museum with an urn of Chun’s ashes.

Chun left Korea in 1998 and lived in New York, keeping a low profile. She reportedly suffered a stroke in 2003 and had since been bedridden. There were many rumors that she died over the years.

Media reports said that after Chun’s death was confirmed, the ministry deliberated on upgrading the honor but decided not to for two reasons: because she did not leave any works for a significant time before her death, and because there was mystery surrounding her death.

“We find both of the reasons unacceptable,” Kim said.

The relatives at the press conference acknowledged division in the family, particularly between them and eldest daughter Lee. They said Lee had single-handedly handled her mother’s affairs. They said they are used to keeping quiet about family matters to avoid damaging Chun’s reputation.

But they said Chun deserved a respectful goodbye from her country and the people.

Although rumors surfaced that the relatives may be in a conflict over ownership of Chun’s works, the relatives denied such allegations and said none of them own her artwork or have thought of making money from Chun’s work.

They said eldest daughter Lee might own some pieces. They also said they have never discussed what should be done with Chun’s work.

Chun has two children from her first marriage. The second two were fathered by journalist Kim Nam-jung, whom Chun never officially married.