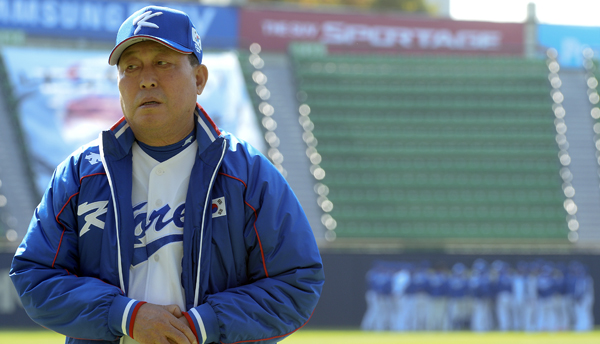 Kim In-sik is back leading the national baseball team for the fourth time. But this time, the 68-year-old may be facing his greatest challenge.

As the team is confronted with a series of issues, Kim was initially reluctant to take the job when he was asked to manage the team for their inaugural Premier 12 tournament which starts on Nov. 8 in Japan.

It has been a tradition that the manager of the Korean Series champions leads the national team after the season is over, but since no professional club manager stepped up to take the job, Kim again had to fill the role.

His difficulties begin with the announcement of the 28-man squad for the Premier 12 tournament on Oct. 7, but the team still hasn’t had training with the full squad because of the Korean Series schedule.

At the training session at Jamsil Baseball Stadium in Seoul on Tuesday and Wednesday, four Samsung Lions players and seven Doosan Bears were absent because of their championship series, while Fukuoka Softbank Hawks’ slugger Lee Dae-ho was also out due to his club’s Japan Series game against Yakult Swallows.

The national team was hit hard even before the first meeting because three Lions pitchers, who were in the Premier 12 squad, were dropped due to suspicion of illegal gambling overseas. The Lions last week said Yoon Sung-hwan, An Ji-man and Lim Chang-yong would not be playing in the Korean Series as they are waiting for the results of a police investigation.

As the Lions identified the suspected players, the KBO also replaced them with Jang Won-jun of the Bears, Shim Chang-min of the Lions and Lim Chang-min of NC Dinos, just one day before the team’s first meeting.

Three Lions pitchers have been performing well throughout the season. Yoon went 17-8 with 3.76 ERA in the KBO League regulars season, while An topped the league in holds (37) and Lim was No. 1 in saves (33).

Kim admits that the absence of these players is a big loss for the national team that has to be overcome. “We had unfavorable factors from the start,” Kim said. “The exit of three pitchers is definitely a loss for us and we see there is a difficult road ahead.”

Leaving the Lions and the Bears players until their Korean Series is over, the national team conducted its final team training at the Jamsil stadium on Wednesday before moving to Munhak Baseball Stadium in Incheon, where the team will continue training until Nov. 1.

Taking a day off on Nov. 2, the team will then move to Gocheok Sky Dome in Seoul to prepare for two friendly games with Cuba on Nov. 4 and 5. The training at Korea’s first full-dome baseball stadium is intended to help the team which will play at dome stadiums in Japan.

“We can’t just sit and worry about it,” said Kim. “Although we have players in the Korean Series, the rest of the players will first prepare for the friendlies against Cuba.”

Korea is in Group B along with the United States, Japan, Dominican Republic, Venezuela and Mexico. The team will leave for Japan on Nov. 6 to play their first game against the host nation two days later at the Sapporo Dome.

“We need to collect at least three wins to reach the quarter finals,” said Kim. “After passing the group stage, we will set a higher goal.”

Kim hinted they will focus on recovering the stamina of the 11 players who are playing in the Korean series when they return to the national team.

“In terms of playing rhythm, those who are in the Korean Series will be better, but they will have some stamina problems,” Kim said. “What’s important is that they should not pick up injuries.”

Unlike the Summer Games or the Asian Games, this tournament does not offer military exemption, which reduces the motivation of young players. For this national team, there is nothing to offer but national pride.

“When players wear the national team uniform, there is cohesion and certainly it creates another power,” said national team pitching coach Song Jin-woo. “Like Kim said, our pitching is not as strong as our batting, but if we stay together and sacrifice for the team, we can perform well.”