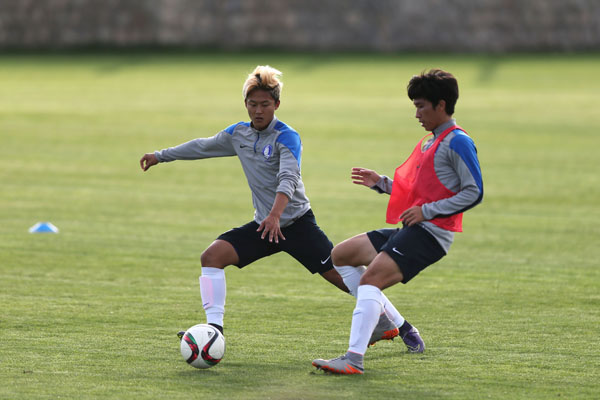 Coquimbo, CHILE - More than 16 months after Belgium knocked Korea out of the group stage of the FIFA World Cup, Lee Seung-woo has his sights set on revenge.

The Korean Under-17 men’s national team forward was an up-and-coming player when the senior team lost 1-0 in Brazil. Now he is looking for payback when the U-17 team meets Belgium in Round 16 of the FIFA U-17 World Cup in Chile today.

“When I heard that our opponent is Belgium, my first thought was that we can get revenge for the senior national team’s loss last year,” Lee said.

Korea, who finished on top of Group B without a loss, will line up against Belgium, who finished third in the Group D, at the La Portada Stadium in La Serena, Chile at 8.a.m. today (Korean time).

In the history of Korean football, the senior team, U-20 team and the women’s team have never beaten Belgium. Only the U-17 team has beaten Belgium, in a 2007 friendly match with a 2-1 victory.

This time, it’s not a friendly, but the knockout stage at the biggest tournament in the world, where a loss would mean elimination. In this tournament, if the teams draw after regulation time, the game will be decided in penalty shoot-outs without overtime.

Lee understands what his coach means and is confident his team can reach beyond Round 16. If Korea beats Belgium, the team meets the winner between France and Costa Rica in the quarter finals.

“If I’m picked as the kicker [for a penalty shoot-out], I will and must succeed scoring,” Lee said. “I don’t want our journey to end in Round 16 or the quarter finals. I want to go further ahead with my teammates.”

Lee has been one of the most spotlighted players in this tournament because he is playing with FC Barcelona B and is the leading scorer in the Asian qualifiers. Previously, he was criticized by some fans for his selfish plays and arrogant behavior, but this isn’t the case at the World Cup.

“As Lee Seung-woo started to change, the whole team’s attacking tactics have been better,” said Kim Ho, former Korea national team coach for the 1994 World Cup. “Lee is a player who knows how to score a goal, but in this tournament, he is focusing on how to win as a team.”

In the three group stage matches, Lee hasn’t scored a goal, although he has been working hard to create chances. When teammates Jang Jae-won scored against Brazil and Oh Se-hun’s goal knocked out Guinea, Lee celebrated with teammates like he had scored.

“I realized it is more effective for our team when I support my teammates, instead of my teammates trying to support me,” Lee said. “I’m ready to throw myself into the game. I will take any role for a victory.”

“He’s great at holding the ball up and he can keep two or three defenders occupied, which gives room for other players to breathe and creates more space,” said defender and team captain Lee Sang-min. “In a way, he helps us defend better because he tires the opposition defense out.”

Lee is not in his full playing rhythm as he hasn’t been playing competitive matches with FC Barcelona because the team is being punished for transfer rule violations. As well, he is under the pressure of people’s large expectations, according to Lee’s father.

“He told me that his breathing gets difficult just 20 minutes after kick off. When I see him playing hard until the final whistle, I feel sympathy, but proud as well,” said Lee Young-jae.

Lee, 17, said that he wants to be remembered as a player that brought titles to Korea, revealing his success at FC Barcelona is not a priority. He creates atmosphere both on and off the pitch.

“When I see him dancing to the rhythm of the loud music after we have won the match, I see that he is a really fascinating guy.”

For Lee, this is the team with which he wants to create fond memories, and he has one request for coach Choi.

“I want the coach to allow us to go on a team trip when the tournament is over,” Lee said. “If he approves my request, I will answer his approval by leading our team to the semi-finals.”

Coach Choi believes in Lee’s ability in the knockout stage.

“With Lee Seung-woo, we can score more goals,” he said.

The 44-year-old acknowledged that Belgium has a good defense, but he is comfortable he has had enough discussions with players on how to break the European team’s defense.

Choi, who played in the 2002 and 2006 World Cup, said his team will keep the 4-4-2 formation, but will not stick to one tactic throughout the match.

“In a defense situation, what’s important is the quick transition from offense to defense,” Choi said. “We will show what we can do best.”