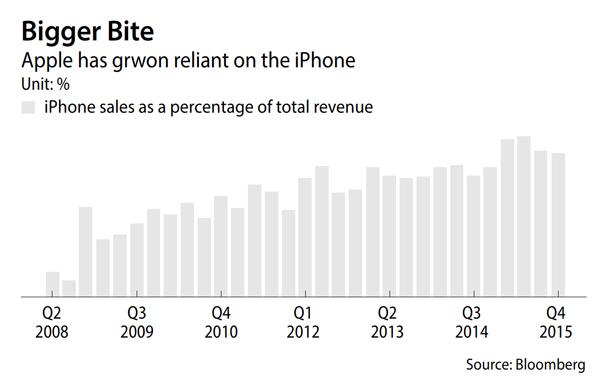 Apple has been corporate America’s most ridiculously unbelievable growth story. And now it’s over. Take a deep breath. Exhale. Get used to it.

Yes, the Apple we have come to know was a gravity-defying growth machine. Apple is the most valuable company in the world, yet it increased its revenue in the last 12 months by more than last year’s sales at Coca-Cola. Apple rang up enough operating cash in the last year to buy 625,000 Tesla Model X cars - nearly one for each person in San Francisco. (I’ll take blue with tan leather interior, please.) The company has given us so many eye-popping numbers that any feat short of Tim Cook colonizing Mars is underwhelming.

With the setup of high expectations, the most crucial numbers are now more low-Earth orbit than deep space. Unit sales of the iPhone for the three months ended Sept. 26 climbed 22 percent from those in the period a year earlier. Just a few months ago, Apple sold 60 percent more iPhones than it did a year before. Wall Street will be thrilled if iPhone sales increase at all in the holiday quarter, compared with the frenzied sales of the iPhone 6 during the 2014 holidays. Apple’s own forecast, which is often conservative, is for a tiny increase in revenue in the three months ending in December.

The existential question for Apple is whether the company is in another lull before a turbocharge from the iPhone 7 or something else, or whether unspectacular growth is the new normal.

It’s true that this isn’t the first time Apple seemed to run out of steam. Just before the introduction of the iPhone 6 models a year ago, Apple posted five consecutive quarters of single-digit revenue growth, according to Bloomberg data. Sales took off again once people snapped up the larger-screen iPhones.

What’s different this time is Apple is in part to blame for doubts about its growth trajectory. The company has fallen into an unhealthy reliance on a single product: the iPhone. The smartphones generated just more than half of Apple’s sales before the introduction of the iPhone 6. That number has risen to 63 percent or more in each of the last four quarters.

Part of that shift, of course, is the remarkable sales run for the iPhone. It’s also because the Apple Watch, Apple Music or potential future electric minivans aren’t big enough to pick up the slack right now, and maybe never will. Sales of Mac computers are defying the shrinking PC market, but revenue gains are pedestrian. The iPad seems to have settled into a rut as a nice-but-not-essential consumer gadget that users don’t upgrade as often as the company would like. Revenue from iPads fell for the seventh quarter in a row, by 20 percent in the latest three months.

Apple is used to defying predictions that it can’t top itself. Those predictions look more likely to come true than ever before.


*The author is a Bloomberg View columnist on technology.