Chuseok puts the wind back into retailers’ sails

Chuseok puts the wind back into retailers’ sails 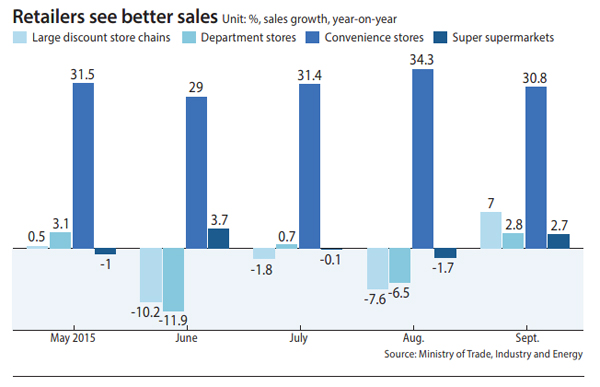 Korean retailers saw their sales spike in September, thanks to recovering consumer sentiment and the Chuseok holiday.

Drastic increases in food sales led the overall rise at all types of retailers. People spend more on low-end, processed food in their daily lives, while spending more on luxury goods as Chuseok gifts.

Large discount store chains like E-Mart, Homeplus and Lotte Mart saw a sales grow 7 percent in September compared to a year earlier, data from the Ministry of Trade, Industry and Energy showed on Wednesday, followed by department stores of 2.8 percent and conglomerate-brand supermarkets at 2.7 percent.

“Sales growth at large discount store chains and department store steadily slowed to linger at the minus level since beginning of this year, but the growth gained momentum in the past three months,” said an official at the Trade Ministry.

Convenience stores saw an almost 30.8 percent year-on-year rise in monthly sales in September, but this has been a trend that has steadily continued since the government raised cigarette prices in January.

But at convenience stores, sales of instant and processed food like pre-packaged meal boxes, instant ramyeon noodles, imported beer and snacks, also contributed to maintaining such high growth. Thanks to the trend, the number of convenience stores increased last month by 9.9 percent year-on-year.

Department stores’ clothes sales fell by 6.1 percent in September compared to a year earlier, due in part to increased competition with other types of retail businesses like online shopping malls and outlet stores.

The rise in overall domestic consumption also resulted in an increase of electricity consumption at commercial and residential areas by about 4.2 percent year-on-year during the past three months.