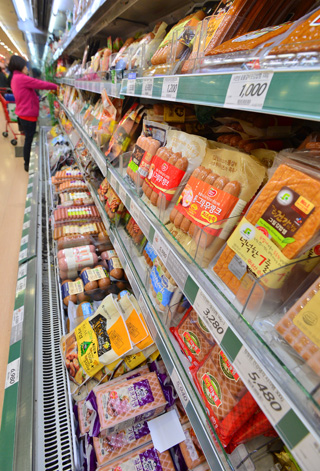 An aisle at a major supermarket in Seoul selling hams, sausages and other processed meat on Wednesday. Sales of processed meat fell after the World Health Organization said it was a carcinogen. [NEWSIS]

Retailers in Korea saw a sharp drop in meat sales after the World Health Organization (WHO) said processed meats such as bacon, sausage and ham are cancer-causing substances.

Sales of meat plunged by more than 10 percent in big discount supermarkets.

E-Mart, the top discount chain, reported a 16.9 percent decrease in sales of processed meat on Tuesday compared to a week earlier.

Other big supermarkets saw similar drops, with Lotte Mart posting a sales decline of 17.9 percent during the same period. Sales of processed meat fell 15 percent on Tuesday compared to the previous Tuesday.

“We still need to look closely at what caused the decline, but it is true that meat consumption has fallen,” a representative of Lotte Mart said.

Earlier this week, the WHO classified processed meat as Group 1 carcinogens, placing cured and processed meats in the same category as alcohol, arsenic and tobacco.

“This category is used when there is sufficient evidence of carcinogenicity in humans,” the WHO said in a statement.

“In the case of processed meat, this classification is based on sufficient evidence from epidemiological studies that eating processed meat causes colorectal cancer.”

The report went on to warn that red meat could probably cause cancer, and it was categorized a Group 2 carcinogen.

“In the case of red meat, the classification is based on limited evidence from epidemiological studies showing positive associations between eating red meat and developing colorectal cancer, as well as strong mechanistic evidence,” the group explained.

As soon as local media reported the WHO’s actions, Korean consumers were spooked. The terms “sausage” and “cancer” were among the most searched words, and related news reports were the most read articles on popular portal websites, including Naver and Daum.

The news dealt an immediate blow to retailers and meat manufacturers.

Processed meats include hot dogs, ham, sausages, corned beef and beef jerky, as well as canned meat and meat-based preparations and sauces, according to the health organization.

The findings were met with furious responses from the meat industry.

The Korea Meat Industries Association said that moderate meat consumption in Korea is not likely to increase the chance of coming down with cancer.

The WHO and a research institute under the organization concluded that each 50-gram (1.76-ounce) portion of processed meat eaten daily increases the risk of colorectal cancer by 18 percent.

“Referring to the report, if a person consumes 50 grams of meat daily, the yearly consumption becomes 18.3 kilograms,” a representative of the industry organization said.

“But Koreans consume 4.4 kilograms of processed meat every year, which accounts for 24 percent of the cited consumption.”