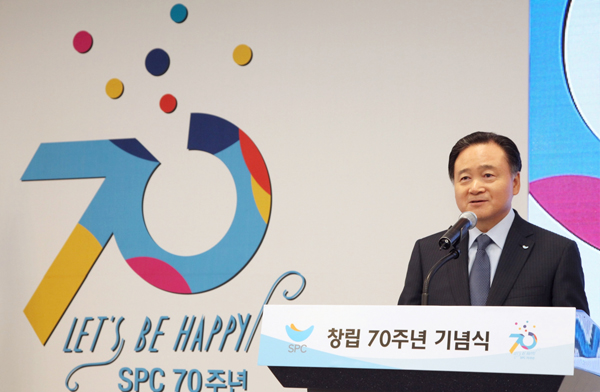 Hur Young-in, Chairman of SPC Group, presents business strategy on Tuesday at an event marking the 70th anniversary of the company held in the headquarters in Daebang-dong, southern Seoul. [SPC GROUP]

Marking its 70th anniversary, the SPC Group, a leading operator of food and bakery chains, said on Wednesday it will invest 2.6 trillion won in research and development.

The investment plan is intended to achieve a sales target of 20 trillion won by 2030 and break into some 20 countries, said the owner of bakery chain Paris Baguette.

“We will develop SPC into a great food company with 12,000 stores across the world and 20 trillion won in sales by 2030,” said Hur Young-in, chairman of the group.

The chairman also stressed the importance of young talent. “In the process, SPC will create 100,000 jobs for young people,” he said.

The anniversary came as the company expands its business portfolio to open different kinds of desert shops and restaurants.

But the crown jewel is Paris Baguette, Korea’s largest bakery chain. With the bakery brand, SPC has set its sights on the overseas market. The bakery shop has opened stores in China, the United States, Vietnam and Singapore.

Still, the most notable expansion took place in Paris where its motif came from.

In 2014, Paris Baguette opened its first “flagship” store in the heart of the French capital.

With 46 seats, the Paris store is located in the 1st arrondissement near Chatelet subway station. The station is in the center of Paris, near landmarks such as City Hall, Notre Dame Cathedral, Pont Neuf bridge and the Louvre Museum.

Besides business-related issues, the chairman emphasized corporate social responsibility at the ceremony attended by workers and owners of shops.

“If we are to last 100 years and more, we need to engage in cooperation and sharing with those with modest backgrounds and local merchants,” he said.