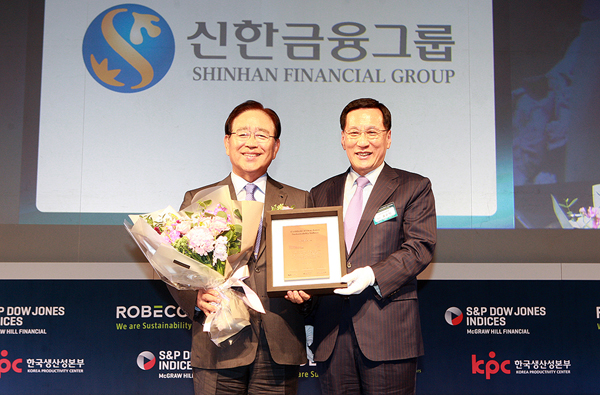 ­Shinhan Financial Group Chairman Han Dong-woo, left, receives an award from Korea Productivity Center CEO Hong Soon-jick at the Grand Hyatt Hotel in Seoul on Wednesday, for being an outstanding company with strong sustainability on the Dow Jones Sustainability Index. Last month the group became the first Korean financial company to be included on the Dow Jones Sustainability World Index for three consecutive years. Shinhan is one of the 27 banks that were included on the list, including Westpac, Standard Chartered, Citibank, BNP Paribas and Barclays. The financial group was recognized for its stable governance structure, ethical management, social contribution activities and solid balance sheet. The company said it has been working on further improving its management and social contribution this year as it became the first in the country to create a sub committee within its board of directors committed to social contribution. It was also included in the top 100 global companies at the World Economic Forum in Davos. [SHINHAN FINANCIAL GROUP]