In place of parents, another kind of support

In place of parents, another kind of support 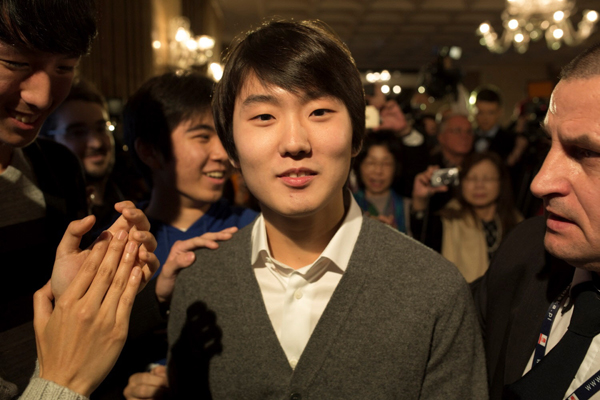 Cho Seong-jin, a 19-year-old Korean pianist, is congratulated after winning first prize at the 17th Chopin International Piano Competition that was held last week in Warsaw, at which his parents were notably absent. [FRYDERYK CHOPIN INSTITUTE]

Lately Korean music fans - not only classical music-lovers but also K-pop fanatics - have been buzzing about the young pianist Cho Seong-jin.

Since then fans have been sharing the video of his impassioned performance of Fryderyk Chopin’s Piano Concerto in E minor, Opus 11, across social media. And Cho’s followers are counting the days until he releases a new album on Nov. 6. So far this enthusiasm has put the album at the top of the list for preorder sales, a first for a classical album.

Meanwhile, many have started to wonder about the talented pianist’s background, asking whether his parents were themselves great musicians. Cho’s parents were noticeably absent from the competition.

While the finalists waited with their families to hear the announcement of the winner, Cho was standing alone. And when his name was called, his parents were nowhere to be seen on the live broadcasts.

“From the preliminary to the announcement of the first-prize winner, Seong-jin’s mother was watching Seong-jin from a distance,” Cho’s father told the JoongAng Ilbo, declining to give his full name. “We wanted Seong-jin to be the one leading everything and not us.”

Cho’s parents did not want any publicity or pictures taken of them and stayed as far away from their son as possible. “That’s what we’ve decided to do since he was a young boy,” his father said.

Cho’s father is an employee at the construction arm of a conglomerate while his mother is a housewife. They are known as “shadow parents.” Cho’s teacher, pianist Shin Soo-jung, said Cho’s parents are “very quiet parents who leave their son to make his own way while they stay only as supporters.”

As such, Cho’s family is different from other musical families. Behind most Korean musicians who make it big in the international music scene, there are often parents who are even more passionate and devoted than their children, or who have great musical talent themselves.

In the case of the three musical siblings Chung Myung-wha, Chung Kyung-wha and Chung Myung-whun - known as the “Chung Trio” - there was their late mother, Lee Won-sook, who became a symbol of the devoted Korean mother, especially in musical circles. She was recognized for bringing up her three children as world famous musicians by giving all she had for them.

To educate them in the United States, Lee sold the restaurant she owned and moved to a foreign land where she opened a new Korean restaurant. She even took it upon herself to fix all the chairs in the small concert hall where her little daughter’s recital was held so that none of the chairs squeaked while she played.

Other world-renowned musicians, like cellist Chang Han-na, who has even made a debut as a maestro, are known to have parents who are both musicians. Chang’s father was a violinist and her mother studied composition.

But there is no such story for Cho, or many other Korean rising stars in the classical music world.

Pianist Son Yeol-eum, 29, for example, said she remembers flying to Moscow on her own when she was in sixth grade, because her mother had other commitments as a high school teacher. Pianist Kim Sun-wook, who gained recognition after winning the first prize at the prestigious Leeds International Piano Competition in 2006, said he drove himself to and from the venue for the competition. His parents are not musicians but elementary school teachers.

And recently the public was shocked to learn that the family of 19-year-old Mun Ji-yeong, who became the first Asian winner of the Ferruccio Busoni International Piano Competition last month, is supported by the government, receiving a basic living livelihood subsidy.

While these musical stars did not have 24-7 support from their parents, what they did have was the full support of teachers, sponsors and the music community.

Various patronage programs run by conglomerates, such as the Kumho Asiana’s Cultural Foundation, serve to foster talented young artists. Since 1998, Kumho Asiana produced more than 1,000 young artists through its program, including Cho, Son, Kim and Mun.

Mun also attended the School for Young and Gifted at the Korea National University of Arts, where she was mentored by Prof. Kim Dae-jin. Such a system for connecting students with professional mentors has become common in Korea’s classical music community, lessening the burden on parents.

“We can all remember back in the days when our old parents copied LP records to let their children listen to some music,” said Kim Yong-bae, former president of the Seoul Arts Center.