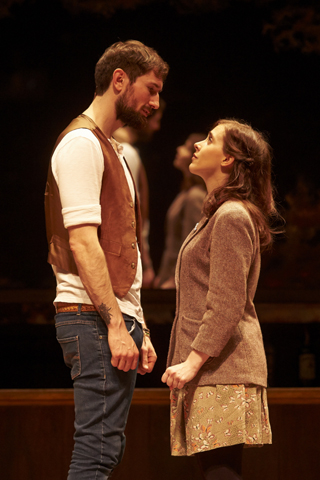 Musical actors from “Once” busk in front of the Hyundai Card Music Library in Itaewon, central Seoul. [SEENSEE COMPANY]

The musical “Once” is an adaptation of a successful film of the same name. Set in Dublin, the film helped make a name for the two starring musicians, Glen Hansard and Marketa Irglova. They composed and performed all of the songs, and “Falling Slowly” even won the 2007 Academy Award for Best Original Song.

This precedent might put pressure on Tom Parsons and Megan Riordan, who play main characters Guy and Girl in the musical ongoing at the Charlotte Theater in Jamsil-dong, southeastern Seoul, but the two actors say the musical and film are quite different.

“Even though they are, of course, I almost feel like they are not even the same thing,” Riordan said. “If there’s anyone out there who’s seen the film and loved the film and is afraid that the play would diminish it or change it, it doesn’t.”

Riordan added that the adaptation of the musical is “very clever and wise in a way that it preserves all the things in the film that people love but it makes theatrical.” The musical tells the story of a Dublin street musician, and a girl who won’t let him give up on his dream.

Under the direction of John Tiffany, the original director of the musical, the show has been running for just over a month in Seoul and will wrap up on Sunday.

At first, Parsons and Riordan were somewhat surprised by the contrast in how the Irish audiences and the Korean audiences enjoyed the show, but they soon realized that Korean audiences were enjoying the show just as much.

“The show is written in very Irish voice by an Irish writer, so doing that show in Dublin was really kind of a magical experience because every joke, every inside reference, every character, that’s really for Dublin, the audience really got it so fast,” Riordan said in a recent interview with the Korea JoongAng Daily.

“I think it was partially the nature of the theater we were in as well. It is used to having quite an energized audience in that theater for the types of the shows they do there so they came ready to be really vocal, whereas here in Seoul there are different factors for the plays.” 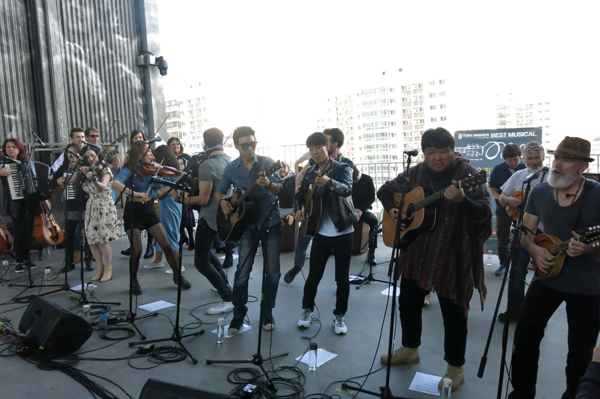 The musical “Once,” starring Tom Parsons as Guy and Megan Riordan as Girl, is being staged at the Charlotte Theater in Jamsil-dong, southeastern Seoul. [SEENSEE COMPANY]

She also recalled how it was shocking at first to not hear laughter and applause when she expected it due to the language difference, but added the actors “got used to pausing for laughs and applause” for the Korean audiences.

Because music is the central feature of the show, the two actors together with their team and several musicians went out busking during their time off to meet with Korean fans. They went out twice, once near COEX in southern Seoul and recently in Itaewon, central Seoul.

“Busking is at the center of the show,” Parsons explained. “That’s how the show starts, as Guy in the show is a busker.”

“It was amazing to see the turnout, especially for the first one, because that time we’d only been in Korea for few days and it was massive,” said Riordan. “We were surrounded by people who were singing along to all the songs in the show, even the songs in English that are not as famous as ‘Falling Slowly.’”

“I think it’s rare that a musical could do that with its songs,” she continued. “Otherwise you need a full orchestra or recorded tracks and it wouldn’t really be the same on the streets. You would probably lose something in the translation from the big stage to doing it on the streets, but our numbers are meant to be on the streets.”

The show also calls for actors to interact with the audience before every performance during the preshow, inviting attendees for a drink up on stage, which is set up to look like an Irish pub.

“[Such a setting] creates a different relationship between the audience and the performance than you would normally get in a play or a traditional musical and breaks down the barrier between the stage and the auditorium,” Riordan explained.

“It creates an environment that primes the audience to connect very quickly and very deeply and reminds them that they are a part of it and that they are not separate from what’s happening.”