Korea rises to No. 4 in World Bank rankings

Korea rises to No. 4 in World Bank rankings 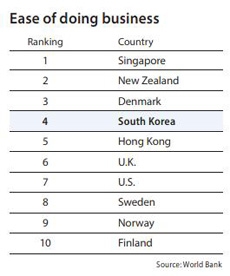 Korea ranked fourth in the World Bank’s Doing Business report, an influential survey that assesses the operating of business in 189 countries, rising one place from a year earlier and reaching its best score ever.

Seoul ranked top among G-20 countries and came in third among 34 OECD countries, according to the annual report released today by the international organization.

As in 2014, Singapore topped the list, followed by New Zealand and Denmark. Following were Korea, Hong Kong, the United Kingdom, United States and three northern European countries - Sweden, Norway and Finland - to make up the top 10.

The survey evaluates 10 major facets of doing business in a country and 34 more specific factors.

Each of the 10 facets is based on a so-called “case scenario” - measuring a country’s legal support or infrastructure in a certain situation. Given that scenario, the bank gets inputs from various specialists in business, such as lawyers, accountants, consultants and experts in real estate.

One key facet is starting a business, which measures how much it would cost to start a business in a city with initial capital of as much as 10 times the annual per capita gross national income of the country.

In terms of enforcing contracts, Korea rose to second from fourth in 2014, with improvements in the cost and efficiency of legal procedures.

Still, Korea lagged behind in other key factors. Its ranking in the ease of starting a business deteriorated to 23rd from 17th during the same period. There was no change in Korea’s rules, while other countries improved.

In dealing with construction permits, Korea fell to 28th from 12th this year, due to new strictness of authorities approving construction to improve public safety.

In the category of “trading across borders,” Korea fell from third to 31st.

“The World Bank revised its rules in assessing the customs services of each country in favor of eurozone countries,” a Finance Ministry official said.

“It gave better scores to European countries that impose no tariffs among themselves, which is applicable to the World Bank’s goal of free trade.”

Due to the rigidness in standardized case scenarios, the survey has limits in evaluating overall business conditions in countries, the official said.

The fact that it doesn’t include other key issues in business, such as the environment or labor issues, has also raised questions among industry insiders about the survey’s effectiveness.