Woori is the team to beat as new season opens

Woori is the team to beat as new season opens 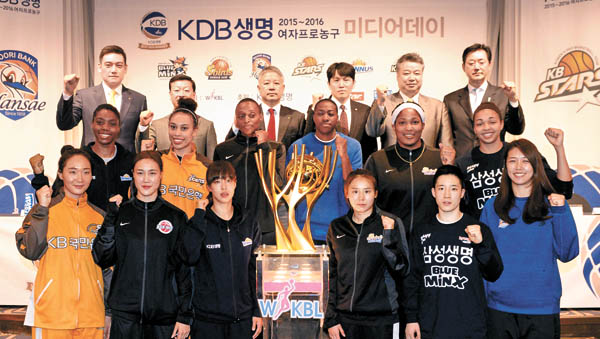 Players and coaches from six WKBL teams pose in front the league trophy during a media event in Seoul on Oct. 19. The news season of women’s basketball league starts on Saturday. [newsis]

The new season of the Women’s Korean Basketball League (WKBL) begins its five-month journey this weekend as Chuncheon Woori Bank Hansae hopes to capture the league for the fourth straight season.

Starting with the league opener between Bucheon KEB Hana Bank and Guri KDB Life Insurance Winnus at 3 p.m. Saturday, there will be a total of 105 games until March, with the six teams playing 35 games each.

This season, there will be games every day except Tuesdays. Games on weekends or holidays will start at 2 p.m., while weekday games are played at 7 p.m.

While the regular season champion heads direct to the best-of-five championship series that starts on March 16, the No. 2 and No. 3 team will have to go through a best-of-three playoff series to book their place in the final.

The most noticeable rule change will be re-adopting the so called “14 seconds rule,” which is coming to the WKBL for the first time since the 2011/12 season. The 14 seconds rule means that when an attacking team gets ball possession again after a player’s shot touches the rim, the team is given 14 seconds to score instead of another 24 seconds. The aim is to increase the average scoring in a game as well as push teams into quick attacks.

“With the 14 seconds rule, there could be some errors because players will try to rush attack, but since they are pros, they will eventually convert the chances,” said Cha Yang-sook, an analyst at KBS N Sports. “Teams who practice a lot can play offense-centered basketball and the rule change provides a good opportunity to score more.”

For this season, Chuncheon Woori Bank Hansae, which has won both regular season and the championship series for three straight seasons, is again tipped as the top contender.

Incheon Shinhan Bank S-Birds finished second in the regular season, but lost to Cheongju KB Stars in the playoffs to miss the final series. The S-Birds coach Chung In-kyo said his team will have revenge on the Stars before defeating Woori Bank.

Woori Bank coach Wi Sung-woo said it’s not for his team to step down from the throne. “This season, I feel that the atmosphere is fierce more than ever,” said Wi. “We want more applause. Now is not the time to leave.”