Screen X aims to bring cinema to the next level

Screen X aims to bring cinema to the next level 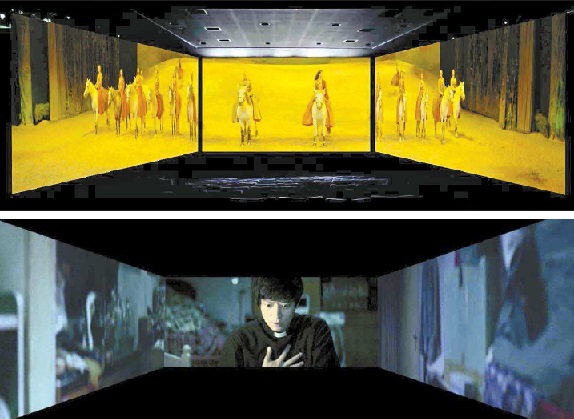 CJ CGV features using Screen X technology, including “Odysseo,” top, an equestrian and acrobatic show, and “The Priests,” above, an upcoming horror film starring Kang Dong-won, offer a panoramic, 270-degree view across three screens, one main screen in front and two on either side. [CJ CGV]

CJ CGV, Korea’s largest theater franchise, has been an industry leader in developing theater technology intended to take moviegoers’ experiences to the next level.

One example is CJ 4DPLEX, a subsidiary of the franchise that introduced theaters featuring moving chairs and special effects to allow audiences to experience movies using all their senses. Established in 2010, the brand currently has 196 screens in 34 countries.

Now, the latest on the company’s agenda is commercializing what’s called Screen X. The patented technology, developed in 2012 in collaboration with KAIST, provides a 270-degree view of films on both the front main screen as well as the two side walls.

To maximize the technology, the company is focusing on finding suitable content for viewing on three walls.

“Breaking the 100-year-old format of watching only the front screen is challenging,” said An Goo-choul, senior vice president of CGV’s Screen X division, in a recent interview with the Korea JoongAng Daily at a Screen X lab in Sinsa-dong, southern Seoul.

“But with content development, Screen X definitely has a chance in the international market.”

Among the latest productions is a recording of the live equestrian and acrobatic show “Odysseo.” The show, created by the Montreal-based performing group Cavalia, was captured on film to show the unique tribute to the relationship between humans and nature across three screens.

“It was an R&D process for us to shoot the performance last October,” An recalled, adding that the company aimed to determine, “What would it feel to watch the performance in a theater using three screens?”

The result is quite noteworthy, with scenes depicting acrobats flying across the theater from one wall to another and horses galloping across fields spanning all three screens, successfully giving the audience the feeling of actually watching the live show.

The dreamy lighting that fills the stage, and hence the theater as well, further enhances the magical ambience.

Creating motion pictures for Screen X theaters started out in a very analogue way, where the films for each of the three screens were shot separately.

But An says the technology has developed further now so that cameras can simultaneously record in three directions. The semiautomatic camera encompasses the necessary tilting and simulation systems as well.

In order foster more technicians who can use this technology to shoot Screen X films, the Korean Academy of Film Arts (KAFA), one of the most prestigious film schools in Korea, established a class solely dedicated to the format this year.

“When a knowledgeable film school says they will train students for it, it means that Screen X is gradually being accepted as a new format for movies,” An noted.

KAFA students have made four films this year that were explicitly designed from the initial script-writing phase to postproduction in the Screen X format.

Moving into overseas markets, which is now a necessary step for any new field of film technology, has not been as speedy for Screen X as it was for its predecessor, 4DPLEX.

But it is definitely making progress.

In April, the company participated in CinemaCon 2015, an international convention for cinema owners held in Las Vegas, where it showcased the technology for the first time on a global stage. The new technology was especially well-received among animation studios, including Pixar.

In August, Screen X and Wanda Cinemas, the largest theater company in China, agreed to cooperate in expanding the format further, perhaps even to Hollywood.

As a first step, Wanda Cinema’s big-budget adventure film “Mojin ? The Lost Legend” (previously known as “The Ghouls”) is slated to be released by the end of this year in 270-degree format simultaneously in three countries: Korea, China and the United States.

“The Chinese market is much more open to accepting a new format of theaters compared to America,” An said.

“We are focusing on expanding the number of screens in China while looking for the right content to interest the U.S. market,” he added.

The next Screen X feature coming to Korea is going to be the exorcism horror film “The Priests,” starring Kang Dong-won, which is the first commercial film to be produced with a Screen X release in mind, shooting specifically for projection on three screens.

It opens nationwide next Thursday.

“Previously, Screen X films were made out of an R&D concept,” An explained. “But I can say that ‘The Priests’ has reached a point where it is in the presentation stage.”

The disaster film “Himalaya,” starring Hwang Jung-min, is also slated to be released in December in the Screen X format.