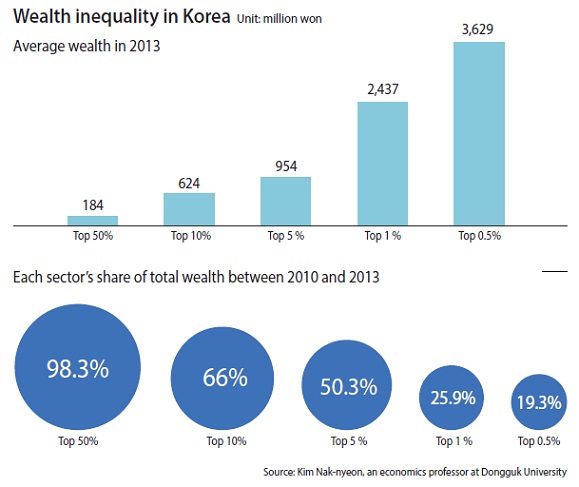 The richest men and women in Korea hold a much larger portion of the nation’s total wealth than the poor, according to a study released Thursday.

In fact, those in the top 10 percent own more than 60 percent of all wealth, while the bottom 50 percent have less than 2 percent.

In a report titled “Wealth Inequality in Korea, 2000-2013: Evidence from Inheritance Tax Statistics,” Kim Nak-nyeon, an economics professor at Dongguk University, studied both the financial and real estate assets owned by Koreans over the age of 20, based on the inheritance tax collection data compiled by the National Tax Service (NTS).

The state-run Statistics Korea has its own assessment of people’s assets. But Prof. Kim said those numbers were less accurate because they are based on households. He added that the figures are also self-reported, which meant respondents could downsize their assets or income.

This is the first study that has focused on individuals rather than households, and is also the first to use data on the property and financial assets of the deceased collected by the NTS, Prof. Kim said.

Even if the children of the deceased are not subject to inheritance taxes, a thorough assessment of the person’s belongings is collected at the NTS when he or she is reported dead. That assessment does not include smaller personal valuables such as jewelry, Prof. Kim noted.

So-called threshold wealth, which refers to the minimum amount of assets needed for a Korean to be included in the top 10 percent, was 224 million won as of 2013.

Wealth inequality has worsened over the past decade, the report showed. Between 2000 and 2007, the assets of those in the top 10 percent accounted for 63.2 percent of the total. Between 2010 and 2013, that figure jumped to 66 percent.

Those in the top 50 percent held an average of 184 million won in 2013, while people in the bottom half had less than 9 million won.

Compared to other developed countries, Korea’s asset inequality was better than in the United States and United Kingdom, but worse than France, in 2010.

Wealth inequality in Korea was higher than income inequality, the report showed.

Based on data from the World Top Income Database, a private data-providing website launched by a group of global economists including Thomas Piketty, the income of the top 10 percent accounted for 44.1 percent of all income in Korea, while their asset ratio stood at 66 percent.

“Inequality is worse in terms of wealth rather than income,” Kim said by phone, “because upper-class people earn high incomes, but also possess financial products such as stocks.”