African runners are expected to lead the pack at marathon

African runners are expected to lead the pack at marathon 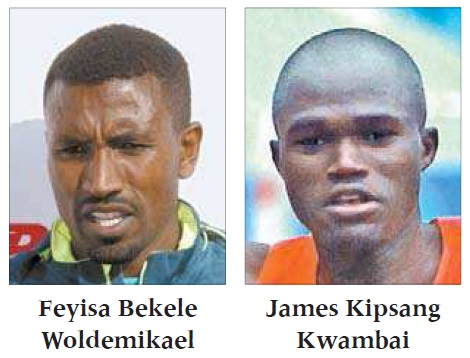 Kenyans and Ethiopians are likely to be the frontrunners at this year’s JoongAng Seoul International Marathon on Sunday morning.

The tournament, co-hosted by JoongAng Ilbo, Ilgan Sports and Korea Association of Athletics Federations, will have 24 runners from six nations in the men’s elite category this year, vying for the $50,000 winner’s prize. They will run the 45 kilometer course that spans southern Seoul and Seongnam, Gyeonggi.

Among the 24, half of them are classified as “gold” rated runners who are recognized by the International Association of Athletics Federations. The rating is given to those who clocked in at under 2 hours, 10 minutes and 30 seconds in events in the last three years or for runners who have competed in the Summer Games or the IAFF World Championships.

Kenya and Ethiopia have split the No. 1 spot at men’s marathons over the years. Kenya, which has world record holder Dennis Kimetto, who clocked 2:02:57, has won the IAAF World Championship four times, more than any other nation. On the other hand, Ethiopia is the top country in the Summer Games having produced four gold medalists.

The competiton between the two African nations has been the highlight of the JoongAng Seoul International Marathon. Since the event started in 1999, Kenyans have won the race nine times, more than any other nation.

But last year, Feyisa Bekele Woldemikael of Ethiopia edged the Kenyans, who have won the event for the last five years. He beat Kenya’s Evans Kiplagat Chebet by three seconds to become the second Ethiopian to win the event.

This year there will be 12 Kenyans and six Ethiopians in the men’s elite race. As runners are positioned according to runners’ personal records, both countries have two runners each in the top five.

Following Kwambai are Franklin Chepkwony, whose personal best is 2:06:11, Francis Kiprop, who was runner-up in the 2009 Berlin Marathon after Haile Gebrselassie at 2:07:04, and the 2006 champion Jason Mbote are dark horses from Kenya.

Morocco’s Rachid Kisri will be the oldest runner in men’s elite race at age 40, while Abderrahime Bouramdane, who has a personal best of 2:07:33, will also be looking for a surprise win.

Koreans Jeong Jin-hyeok and Shim Jong-sub will be looking to break the 2 hours and 10 minute barrier.

While Koreans have not been successful at the JoongAng Seoul International Marathon, they have been doing well in the wheelchair race, where 13 participants from five nations will compete this year.

Hong Suk-man will enter the men’s wheelchair marathon as defending champion after he triumphed in the event last year at 1:33:49. Hong will be challenged by the 2009 champion Kota Hokinoue who is also the Japanese national record holder.