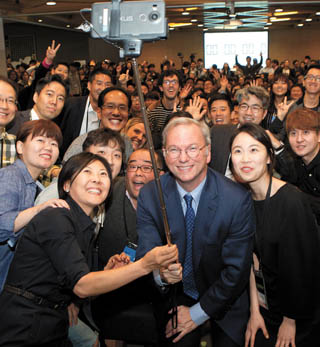 Eric Schmidt, Alphabet executive chairman, takes selfies with an audience after giving a speech on the future of startups and global strategies during a conference at Google’s Seoul campus in Gangnam District on Thursday. At the conference, Schmidt noted that Korea is the most connected country and has many unique strengths. He also told the audience that people learn not only from success but also from failure and that young Korean startups should keep trying. [GOOGLE KOREA]