Samsung to buy back 11 trillion won of its own shares

Samsung to buy back 11 trillion won of its own shares 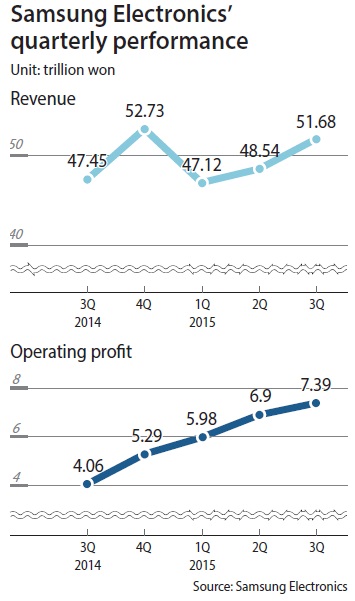 Samsung Electronics announced on Thursday that it would buy back and cancel 11.3 trillion won ($9.9 billion) worth of shares using part of its 56.8 trillion won cash pile to prop up an undervalued share price and return value to shareholders.

The company earlier in the day unveiled third-quarter earnings results that corresponded to a guidance released two weeks earlier. Its shares ended 1.3 percent higher at 1,325,000 after spiking as much as 6 percent during the morning session.

The 11.3 trillion won buyback plan is the largest in the company’s history. It bought back $2.15 billion of its shares in January, the first such move in seven years.

Samsung signaled in a regulatory filing a week before that it was mulling purchasing back its shares as one option to raise shareholder value.

The top Korean conglomerate in terms of market cap also promised to return 30 to 50 percent of its annual free cash flow to shareholders for the next three years after mounting pressure from investors over meager shareholder returns. Its 2015 year-end dividend is scheduled to be announced in January.

The share buyback will be done in three to four phases that will begin on Friday and end in a year. The board approved 4.2 trillion won for the first phase of the buyback program, the world’s top smartphone producer said. The company has no plans to cancel existing shares that it owns, said Robert Yi, senior vice president of investors relations, in a conference call with analysts Thursday morning.

Notably, the contribution of the Device Solutions (DS) division, which includes chips and display panels, to accumulated operating profit climbed to 62.9 percent in the July-September period from 57.4 percent a year earlier.

By contrast, the contribution of the IT & Mobile Communications (IM) division, which is responsible for smartphones, tumbled 10.6 percent to 32.5 percent over the same time span.

In the previous couple of years, about 70 percent of Samsung’s profits stemmed from smartphones, its flagship product category.

The results show that Samsung’s reliance on smartphones has been on the decline, largely owing to slowing sales of the devices, with disappointing sales of its two-month-old Galaxy S6 Edge smartphones and Note 5 phablets in particular.

The IM division’s reduced share in Samsung’s profit pie is also a testament to the company’s shifted focus on products that cater to businesses instead of consumers, a strategy launched earlier this year. Kwon Oh-hyun, vice chairman and CEO of Samsung, said in a letter to shareholders in February that the company has resuscitated its corporate structure to “upgrade business-to-business operations.”

Park Jin-young, vice president of the mobile communications business, admitted the S6 Edge has failed to meet a sales target.

When asked if Samsung is considering adding tangible functionality to the curved screens on both sides of the devices - given criticism that they were merely adopted to brag about Samsung’s technological edge with minimal practical usage - he said the company will continue developing user interfaces that would give consumers “distinguished experiences,” without elaborating.

On Monday, Apple announced it generated the biggest annual profit in corporate history with net income of $53.4 billion. The company closed its fiscal year of 2015 in September. Apple being on a roll is both good and bad for Samsung. Although the two companies are archrivals in smartphones, Samsung is also a key supplier of application processors powering iPhones.