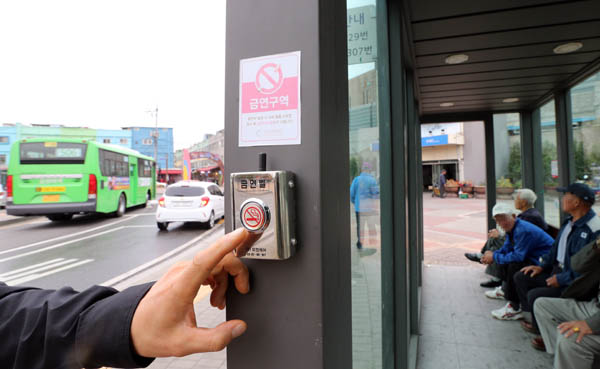 A no-smoking bell is pictured at an Incheon bus station near Dongincheon Station. When pressed, the following announcement is made: “This is a no-smoking area. Please put out your cigarette.” Incheon is planning to increase the number of bells installed throughout the city. [KANG JUNG-HYUN]

Incheon has tightened its controls on smoking, spurred by the release of a report by the Gyeongin Regional Statistics Office that confirmed that the area has the highest smoking rate across the nation among people 20 and over.

According to the 2014 Capital Areas Social Index, the smoking rate in Incheon was 25 percent, higher than other areas, including Seoul and Gyeonggi, which recorded 20.8 percent and 23.9 percent, respectively.

The high smoking rate in Incheon was confirmed again last year by the Health Survey of a Community, performed by the Centers for Disease Control and Prevention, in which Incheon recorded the highest 25.6 percent smoking rate among all other areas across the country.

A few of the countermeasures that the metropolis has worked on to lower the smoking rate include increasing the number of no-smoking zones this year up to 61,887 from last year’s 30,452, as well as the labor force that cracks down on smokers, up to 96 this year from just 18 last year.

But despite those efforts, however, civil complaints filed against smokers in Incheon continue to rise.

“Even though indoor smoking has dramatically decreased thanks to the expansion of no-smoking zones, the number of people smoking outside those zones, such as on the streets or bus stations, has increased,” said Kang Sin-won, from Incheon’s Health and Welfare Bureau.

In order to preempt potentially new problems, Incheon has come up with what’s known as a no-smoking bell. Incheon invested 11 million won ($983) late last month to install 21 no-smoking bells in public areas such as bus stations. When pressed, an announcement that alerts smokers of the fact that the zone is a non-smoking section is loudly broadcast for passersby to hear.

The bell, which can be pressed by anyone, has been proven to be effective.

“Even though bus stations were designated as non-smoking areas starting this year, the number of smokers nearby didn’t seem to decrease,” said Jeong In-kyo, from the Dong District Health Center in Incheon. “However, the installation of the no-smoking bell made people at the bus station, as well as anyone nearby, put out their cigarettes immediately, once the alarm is broadcast.”

Although several other cities in Gyeonggi, like Siheung and Yangju, have installed some no-smoking bells, Incheon is the first metropolis in the country to adopt and widely make use of the system.

Anyone can press the bell without having to confront nearby smokers; the announcement is made five to 10 seconds after the bell has been pushed.

“Even when I spotted smokers [in non-smoking areas], I just passed by because the majority of them were older than me and I was afraid of causing trouble,” said 22-year old university student Park Young-jin. “But [since the installation of the bell], all I have to do is push the button. It’s really convenient.”

According to the Incheon Metropolitan City government, the number of civil appeals reported against smokers has dramatically decreased since the launch of the bells.

But despite the advantages, there do appear to be a few issues. Because there is no specific sign indicating where the no-smoking bells are located, most are inconspicuous, and some even covered by advertisement flyers.

All that informs people of the location of the bell is a small sticker above that reads “If pressed, an announcement will be made as a reminder that this is a non-smoking area.”

Additionally, the announcements can be hard to hear in noisy areas, and a few of the bells, such as the one near Juan Station, are dysfunctional.

“I drop by the bus station twice a day on my way to and from work. But I didn’t even know that such thing as no-smoking bell existed,” said Hyun Ji-hoon, 26.

To resolve these problems, An Sang-bok, from Incheon’s Health and Welfare, said that no effort would be spared.

“Promotions for the no-smoking bells will be made after negotiations with each district’s health centers. And the number of bells installed will be expanded after receiving applications from each district,” An said.