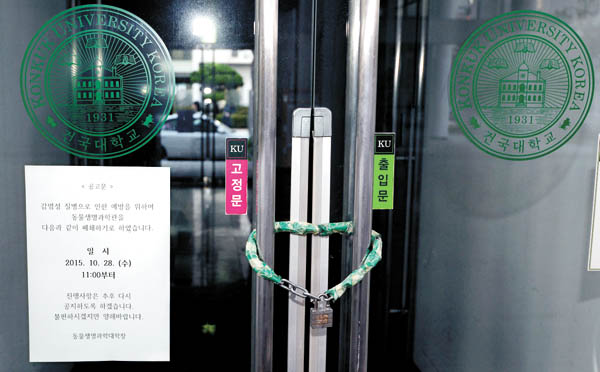 Konkuk University’s Animal Science building, in which an unknown disease has spread, was shut down at 11 a.m. on Wednesday. The university has disinfected the entire building. [NEWSIS]

All of them worked at an Animal Science building that was shut down on Wednesday.

While 23 patients have been isolated for treatment in state-run hospitals, eight with only minor symptoms have been sent home to isolate themselves.

The exact date when the disease was contracted has not been revealed, though the first three patients showed symptoms on Oct. 19.

There is speculation that a visit by four researchers to a cattle show in Anseong, Gyeonggi, last week and the university’s animal farm in Chungju, North Chungcheong, may have been the cause of an initial infection. But the Korea Centers for Disease Control and Prevention (CDC) have not been able to confirm it.

“Although pneumonia of unknown origin is common, it is unprecedented for a bunch of people to contract the disease within the same space,” said an official from the CDC.

The CDC is also examining the possibility that a pathogen used for research during an experiment could have been the source of an infection.

The disease started receiving attention when the Gwangjin District Public Health Center reported to the CDC on Tuesday that the initial three researchers had developed the same symptoms.

The three researchers worked in the same lab in the Animal Science building. They are now hospitalized, according to the CDC on Wednesday. Of the 31 researchers, two are Chinese students.

Symptoms included a high fever and problems in the respiratory system, such as coughing.

The CDC disinfected the Animal Science building, is examining records of people who entered the building, and is inspecting heating and air conditioning systems.

The figure may be higher because SK Group rented the building’s third and seventh floor on Sunday to give tests to job applicants. It is refusing to disclose the number of students who took the test.

Brucellosis, Q fever and avian influenza are the causes suspected by the Gwangjin District Public Health Center, according to Jang Won-jong, a professor at Konkuk University’s School of Medicine.

Kim Young-taek of the CDC, however, said Q fever and brucellosis can only be transmitted from animals to people under certain circumstances, such as touching a cow’s placenta.

Since only four researchers visited the cattle show and the university’s animal farm, the spread of the illness to the other patients could not be explained if the cause is either Q fever or brucellosis. Kim added the chance of passing on pneumonia from individual to individual is very low.

“Possible causes of pneumonia are not confined to a pathogen but extend to other factors such as chemical substances and allergies,” Kim explained. “The core cause of the pneumonia is unknown. We have to wait.”

Song Dae-sub at Korea University’s College of Pharmacy agreed that brucellosis and Q fever are unlikely causes. Song suggested the possibility of the influenza D virus. Unlike the widely known influenza A, B and C viruses, influenza D has recently been discovered in Canada, the United States and France.

“Influenza D is cow influenza. Although cows are not known to be a host of influenza, the virus was first found in 2011,” Song said.