Ministers meet ahead of leaders’ summit

Ministers meet ahead of leaders’ summit 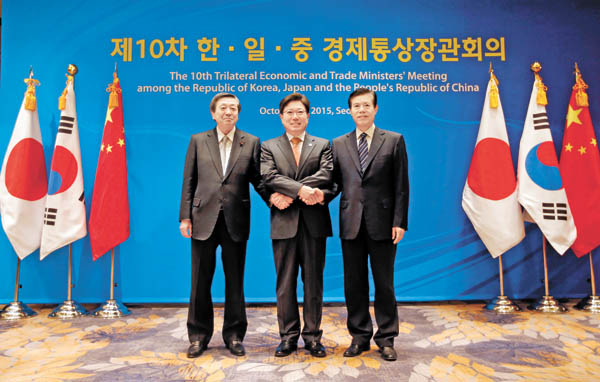 The trade ministers of Korea, China and Japan met in Seoul on Friday for the first time in nearly three-and-a-half years to discuss stepping up trade between the three countries.

The last time the ministers met was in May 2012 in Beijing, China.

According to a statement released by the Korean Trade, Industry and Energy Ministry, the ministers agreed to enhance cooperation to speed up the free trade pact between the countries as well as the Regional Comprehensive Economic Partnership (RCEP), which is considered a mega-trade pact.

The Korean and Japanese ministers also agreed to work together on another massive trade pact, the Trans-Pacific Partnership (TPP).

According to the Korean ministry, all three trade ministers agreed on the need to open markets and vitalize inter-regional trade.

“The inter-regional trade between the three countries has settled at 22 percent, and we need to expand each other’s trade while combing inter-regional economies if we hope to raise the dynamics of our economies and raise sustainability,” Yoon said during the meeting. “Korea, China and Japan need to reach a high-level reciprocal agreement on the FTA and RCEP.”

A free trade agreement between Korea and China is due to be reached by the end of the year. It was agreed to by Korean President Park Geun-hye and Chinese President Xi Jingping earlier this year. President Park, during a speech at the U.S. Chamber of Commerce during her visit to Washington D.C., hinted at the possibility of joining the TPP trade group, as she said it will benefit both Korean and American companies.

Although the Korean third-quarter economy improved, it was largely due to the rising domestic economy whereas exports have been worsening.

The three North Asian countries are the third-largest economic bloc after Europe and the United States.

Europe’s GDP accounts for 24 percent of the world’s economy, followed by the United States with 22.5 percent and the three Asian countries with 21.2 percent. The results of discussions at the trade ministers’ meeting will be delivered on Sunday when the leaders of the three countries - President Park, Chinese Premier Li Keqiang and Japanese Prime Minister Shinzo Abe - meet.

Earlier, according to a high-ranking Korean government official, the leaders of the three countries are expected to discuss creating a Trilateral Cooperation Fund (TCF), which was first proposed by President Park and supported by the Chinese government.