‘Operation’ remembers the Battle of Incheon

‘Operation’ remembers the Battle of Incheon 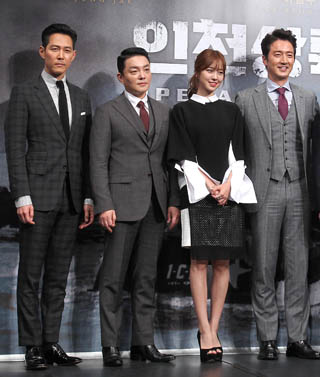 Korea’s upcoming mega-budget film “Operation Chromite” will pay tribute to those who sacrificed and fought during the Battle of Incheon, which broke out shortly after the 1950-53 Korean War.

Operation Chromite refers to an amphibious invasion by UN soldiers on Sept. 15, 1950, at the Incheon port. The maneuver was intended to surprise and push back the North Korean soldiers attempting to take control of the peninsula. Helmed by the famous U.S. general, Douglas MacArthur, the attack played a decisive role in turning the tide of the war in South Korea’s favor.

“While producing ‘71: Into the Fire’ (2010), I came across records that said 17 soldiers died during the Battle of Incheon,” said Jeong Tae-won, head of the production company Taewon Entertainment, during a rare large-scale press event on Friday at the Chosun Westin Hotel in central Seoul.

“I wanted to make a film about the operation in order to let people know about the heroes that were forgotten by history,” he added.
Director John H. Lee, also known as Lee Jae-han, joined forces with Jeong for the second time after “71: Into the Fire.”

“When I first received the screenplay, I was surprised it was more about psychological warfare than being a simple war movie,” Lee said.
“Operation Chromite ended successfully, but I was inspired by the fact that it wouldn’t have been possible if it weren’t for the sacrifices such as those by the [Korean Liaison Office] unit,” he added.

Liam Neeson, who has made headlines by being cast as Gen. MacArthur, sent a greeting video to his Korean fans, saying that he is “excited to start working on this special film,” which will “honor those who fought for freedom and peace.”

Other actors attached to the project include Lee Beom-soo, who will play an elite North Korean commander, and Jung Joon-ho, who will take on the role of the Korean Liaison Office unit’s leader.

Korean-Japanese UFC fighter and entertainer Choo Sung-hoon will also participate in the film as a North Korean soldier, marking his film debut.

The film is slated to be released in the summer of 2016.