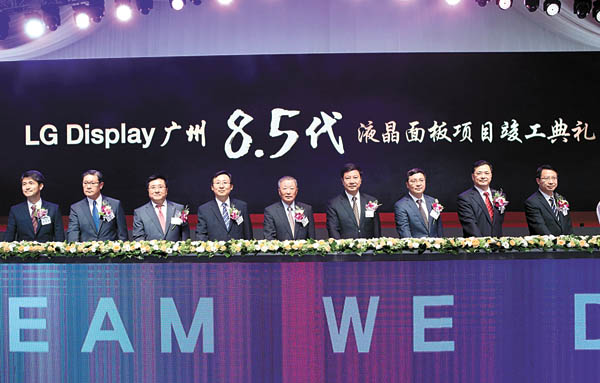 LG Display is continuing to make headway in the global display market.

According to DisplaySearch, a global market research firm specializing in the display industry, LG Display accounted for 23.3 percent of the global LCD market for this year’s second quarter, taking first place for 23 quarters straight. In the first half of 2015, the company recorded turnover surpassing 13 trillion won ($11 billion) and profits of 1.2 trillion won.

Currently managing a wide array of product lines from television screens to smartphones and vehicle displays, LG Display is planning to strengthen its stance in OLED and LCD this year.

In January 2013, LG Display became the first company in the world to successfully manufacture large-size OLED TVs. Afterwards, LG Display organized a separate division to work exclusively on OLED, from technology development to marketing, sales and customer service. According to LG Display, their next step will be to invest in the expansion of the OLED line, releasing products varying in size and resolution tailored to their use.

LG Display’s most recent efforts in the LCD market is the “Art Slim.” First presented at the Consumer Electronics Show 2015 in January, the “Art Slim” is a UHD television with a record-breaking thinness of 7.5 millimeters (0.3 inches) for the 55-inch screen and 8.2 mm for the 65-inch screen.

Apart from its key items, LG Display is also developing expertise in new business areas. One is the automotive display market. As the trend in the car industry is also going “smart,” the market for display screens used in vehicles has expanded over 10 percent per year since 2013. For now, LG Display is supplying products such as center-information displays and cluster screens for automotive companies in Europe, Japan and the United States.

In order to keep up with global demand, LG Display is establishing manufacturing facilities abroad. It is particularly active in China, where the demand for LCD products has recently been soaring. Its activities started with an LCD module plant in Nanjing in 2003. More module plants were later built in Guangzhou and Yantai. In Guangzhou, a production line for LCD displays was launched in 2014 and is currently operating for mass production. As LG Display’s first LCD panel plant abroad, the factory will allow the company to respond to the Chinese market faster, as well as reduce costs from customs and transportation.