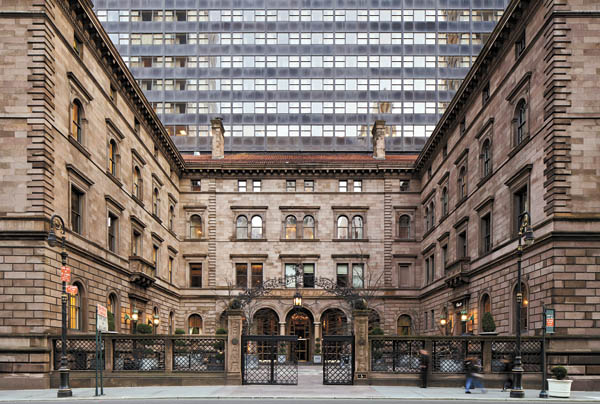 Lotte Group has been leading in areas like retail, food, tourism, chemical and finance through technological innovation, quality improvement and customer satisfaction. Turning its focus overseas, the retail behemoth has set out to be a global corporation with the know-how and capabilities it developed in Korea.

Lotte has been concentrating on Vietnam, Russia, India, China and Indonesia as the starting points of its advancement abroad. New markets recently added to this list are Southeast Asia, Central Asia and North America. Currently, about 60,000 Lotte employees are working in overseas offices in 20 countries.

Lotte Group’s retail business is actively making inroads in overseas markets. Having made its first overseas debut in Moscow in 2007, Lotte Department Store has recently focused on the Chinese market, opening stores in Weihai, Chengdu and Shenyang since 2013.

The branches in Shenyang and Hanoi, Vietnam, are a part of megasize multiplexes, a business undertaken by Lotte Group to raise brand awareness in the global market.

Multiplexes are a project of increasing importance for Lotte, as they integrate the industries in which Lotte has proved strong thus far - food, distribution, construction and service. Through exporting multiplexes, Lotte aims to send abroad other group affiliates, which will strengthen Lotte Group’s brand image globally.

The group’s biggest multiplex currently under construction is in Shenyang, China. Containing a shopping mall, hotel, offices, residential units and a theme park, the site will be built on 150,000 square meters (37 acres) of land and will have 70 floors. The department store partially opened in advance, and the remaining construction is scheduled to finish by 2017.

Lotte Confectionery’s global strategy has been to establish production lines in target markets, starting with its entry into China in the 1990s. In 2010, the list of markets came to include Vietnam, India and Russia, where Lotte Choco Pie was hugely successful. The company also made inroads in Southeast Asian and European markets by acquiring local confectionery companies in India, Vietnam, Belgium and Pakistan.

Lotte Chilsung Beverage also acquired two local companies in China, turning them into foreign branches. Apart from China, it currently exports alcohol and other kinds of beverages to over 40 countries worldwide. The company is especially popular in Japan and Russia.

The fast food chain Lotteria has proved competitive in Vietnam since beginning operations there in 1998. Its strategy in the region was strictly localized, and as a result, Lotteria saw its 200th branch open last year. That same year, it became the first global food chain to enter Myanmar. Lotteria’s coffee shop chain, Angel-in-us, is also being run in countries such as Vietnam, Indonesia, China and Kazakhstan.

Lotte Hotel has also shown impressive outcomes in global markets. Starting with its Moscow branch opened in 2010, Lotte Hotel currently owns affiliates in Hanoi and Ho Chi Minh City in Vietnam, Tashkent in Uzbekistan, and Guam. The portfolio, which was previously concentrated in Asia, recently made a breakthrough in the American market with the opening of Lotte New York Palace last August. Formerly known as the New York Palace Hotel, this building is a 100-year-old landmark sitting in the center of Manhattan. Lotte Hotel acquired the site in May.

Lotte Chemical took its global presence to the next level by acquiring Malaysia’s Titan Chemical, a big name in Southeast Asia’s petrochemical industry. Afterwards, Lotte Chemical established production bases abroad in the United Kingdom and Pakistan through aggressive takeovers. Production line expansion has been done in cooperation with foreign companies, such as the synthetic rubber factory under construction in Johor Bahru, Malaysia, built with Japanese companies.

Lotte Construction plans to augment its investment in its plant businesses and explore frontier markets such as Africa. The most representative work among Lotte Construction’s ongoing projects is the Lotte World Tower in Songpa District, southern Seoul. Construction is set to finish in 2016, and once completed, it will be the sixth-tallest building in the world.