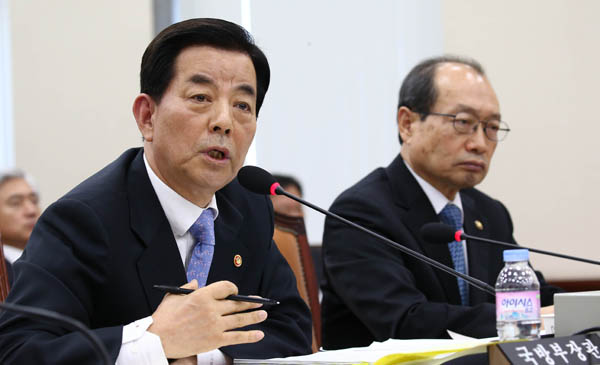 National Defense Minister Han Min-koo denies that Seoul is in talks with Washington over the U.S.-led Terminal High Altitude Area Defense anti-ballistic missile system during a meeting on Friday at the National Assembly. [KIM KYUNG-BIN]

Korea’s defense minister on Friday adamantly denied accusations that the government was involved in any discussions with Washington over the controversial Terminal High Altitude Area Defense (Thaad) anti-ballistic missile system.

With just two days left until he meets U.S. Secretary of Defense Ashton Carter in the regular bilateral Security Consultative Meeting in Seoul, Han Min-koo said that there were “no discussions between Korea and the United States” on that matter.

His remarks, however, stood in stark contrast to those by Mike Trotsky, the vice president of air and missile defense at Lockheed Martin, who said Thursday during a National Press Club presser in Washington that the two countries were in discussions through “formal and informal” channels.

As to how far the discussions had come, Trotsky said he did not know but that the two allies would not reach a conclusion soon, due largely to the matter’s sensitivity.

Lockheed Martin, a Maryland-based global company specializing in aerospace, defense, security and advanced technologies, is the prime contractor for the Thaad system.

Kim Min-seok, the spokesman for Korea’s Ministry of National Defense, said Friday during a National Defense Committee meeting at the National Assembly that “if [Washington] ever requests Thaad’s installment” on South Korean soil, the local government would “independently” examine the proposal and decide based on national interest whether to implement it.

At the meeting, Han also confirmed that a formal request from Washington to start discussions has yet to be made.

Security issues, including the nuclear and missile threat from North Korea, would be a key aspect to consider, Kim said, adding that the Pentagon had “cleared things up” by denying the statements raised by the Lockheed Martin executive.

Pentagon spokesman Bill Urban said Thursday after Trotsky’s press conference that no “formal consultations” with Seoul had been made on whether to deploy Thaad and that he could not provide any information on whether it would be included on the agenda in upcoming defense talks with Korea, which start Monday.

Urban did not say whether there were any informal talks.

Thaad’s installment in South Korea has been controversial, especially because it comes with a radar system that can detect threats more than 1,000 kilometers (620 miles) away, far enough to reach China and Russia.