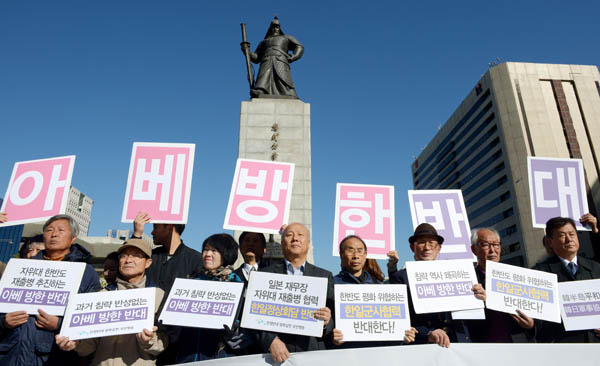 Protesters stage a demonstration at Gwanghwamun Square in central Seoul to oppose Japanese Prime Minister Shinzo Abe’s visit to Korea. They criticized Abe for having failed to show contrition for Japan’s militaristic past. [NEWSIS]

The next four days in Seoul may restore some stability to Northeast Asian diplomacy, as a long-delayed trilateral summit among leaders of Korea, Japan and China is held, followed by a bilateral meeting between the Korean and Japanese leaders.

Annoyance with the right-wing government of Prime Minister Shinzo Abe had kept both such summits from being held for more than three years.

Then on Sunday, Park, Li and Abe will sit down for the first trilateral leaders’ summit since May 2012.

On Monday, the Japanese and Korean leaders will meet face to face, the first such bilateral summit between the two countries since 2012.

Li’s arrival in Seoul comes at a high point of relations between the two nations. In the past two years, both Chinese President Xi Jinping and Zhang Dejiang, the country’s No. 3 official, have visited Seoul.

It is the first visit of a Chinese premier to Korea since May 2010. But Park and Li also met on Sept. 2, when the Korean president visited Beijing to attend China’s celebration of the 70th anniversary of the end of World War II. She held a bilateral summit with President Xi on the sidelines of China’s military parade.

President Xi came to Korea in July last year and held a much-publicized summit with Park. Zhang, chairman of the Standing Committee of the National People’s Congress, visited Seoul in June and met with Park.

“The big issues between the two countries were already cleared during the Korea-China leaders’ summit in September,” said Kim Han-kwon, director of the Center for China Policy at the Korea National Diplomatic Academy. “As Premier Li is a main force behind the economy, these bilateral talks are expected to focus on the Korea-China free trade agreement [FTA] and the Korea-China-Japan FTA.”

Kim added that “there is a chance China may choose to explain to Korea the South China Sea issue.”

On Tuesday, the U.S.S. Lassen, an American guided missile destroyer, sailed within 12 nautical miles of the artificially dredged Subi Reef in the South China Sea, which is also claimed by Taiwan, Vietnam and the Philippines. The move was slammed by Beijing, but Korea has been careful not to take sides between Washington and Beijing.

The trilateral leaders’ summit is expected to focus on economic cooperation and the North Korean denuclearization issue, while analysts do not have high expectations for the bilateral talks between Abe and Park.