Comforting the comfort women: the tale so far

Comforting the comfort women: the tale so far 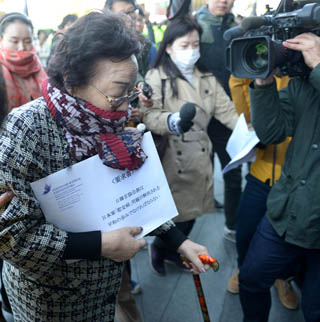 Lee Yong-soo, a former comfort woman, visits the Japanese Embassy in Seoul on Friday to deliver a letter from civic groups demanding proper settlement on the sexual slavery issue. [NEWSIS]

In Monday’s summit between the leaders of Korea and Japan, the key issue for Seoul is the Japanese military’s forced recruitment of women into sexual slavery during World War II.

President Park Geun-hye will hold a summit meeting with Japanese Prime Minister Shinzo Abe on Monday, the first official bilateral talks between the two leaders since they took their positions.

There is special interest in what the two leaders will say on the euphemistically called comfort women issue.

Ahead of the summit and trilateral meeting among the leaders of China, Japan and Korea in Seoul on Sunday, Park said in a written interview with Japan’s Mainichi Shimbun and Asahi Shimbun published Thursday, “I truly wish for the comfort women issue to be resolved within this year through the Japan-Korea leaders’ summit and to heal the wounds of the victims.

“It is important that the Japanese government presents a plan that can be acceptable to the victims and our people as soon as possible,” Park said, emphasizing that the military sex slave issue is not only a bilateral issue but one of women’s human rights.

In the interview, she underscored that “wrong historical perceptions led to stagnated Korea-Japan relations” and that a correction of those perceptions can enable stable bilateral relations and lead to a new starting point for the future.

A Blue House official said on Thursday that Park is highly likely to take plenty of time during the summit to say that there needs to be “a sincere apology” and “responsible measures” taken on the issue.

Since April 2014, the countries have held nine working-level talks between foreign ministry officials to try to resolve the comfort women issue.

The following are some of the main questions on the issue.

Q. How did the issue of the Japanese military’s sex slaves first surface?

A. The issue began to attract international interest after the late Kim Hak-sun testified in 1991 for the first time about her forced recruitment as a so-called “comfort woman.” The Korean victims began to file compensation suits against the Japanese government. Japan insisted that “private recruiters” rounded up the young women, but more historical evidence was revealed that the Japanese government was involved. In January 1992, Japanese Prime Minister Kiichi Miyazawa visited Korea for a summit with President Roh Tae-woo and said, “It is an unmovable fact that the Japanese army was involved in the recruiting of comfort women and managing of comfort stations.”

Japan still refuses to accept the forced nature of the recruitment of women into sexual slavery. Regarding compensation, Japan maintains the position that all war-related compensation issues concerning South Koreans, including comfort women, were settled under a 1965 treaty normalizing diplomatic relations between Tokyo and Seoul, and that rights for individual claims have also expired.

What were the initial efforts by both countries’ governments?

In 1993, President Kim Young-sam revealed a policy for the Korean government to directly support the comfort women victims and to stop focusing on Japan paying compensation. Kim urged the Japanese government to acknowledge responsibility after investigating the facts, rather than just compensating with money. In August 1993, Japanese Chief Cabinet Secretary Yohei Kono acknowledged for the first time that the Japanese military installed and managed so-called comfort stations and that there was coercion in recruiting comfort women, which was the backdrop to the Kono Statement of 1993. Sympathetic Japanese set up the Asian Women’s Fund in July 1995 to support comfort women victims. The objective was to deliver an apology letter from the Japanese prime minister with compensation and medical welfare support.

Why didn’t the Asian Women’s Fund resolve the issue?

The Korean Council for the Women Drafted for Military Sexual Slavery by Japan and other civic organizations and victims rejected this because the Japanese government would not accept legal responsibility. They refused to receive compensation based on humanitarian grounds rather than legal responsibility. From January 1997, Japan tried to deliver 5 million yen ($41,000) to Korean victims from the fund. But most victims refused to accept it and expressed regret that the Korean and Japanese governments ignored their wishes.

When did individual claims start becoming an issue?

In August 2011, the Constitutional Court ruled that the Korean government’s lack of action to help the comfort women victims get compensation from the Japanese government could be considered as nonfeasance and was unconstitutional. In December 2011, President Lee Myung-bak in his bilateral summit with Prime Minister Yoshihiko Noda raised the comfort women issue again.

What is the so-called Sasae proposal, and how did it come about?

In 2012, then-Japanese Vice Foreign Minister Kenichiro Sasae (currently ambassador to the United States) made a three-point proposal during a Seoul visit: that the Japanese prime minister would make a formal apology, the Japanese ambassador to Korea would visit the victims to deliver the apology on behalf of the prime minister and victims would receive compensation on humanitarian grounds.

The Korean government did not immediately accept the proposal because it did not consider it sufficient. Soon after, the Japanese Democratic Party lost power, and the Liberal Democratic Party regained control. In Korea-Japan director-general-level talks to resolve the issue since last year, the two sides have been facing off on which parts of the Sasae proposal needs adjustment.

What is the Korean government’s position and that of civic organizations representing the survivors?

The Japanese government says it will never accept legal responsibility. It is working on compensation for victims, but it wants Korea to agree that this would resolve the comfort women issue once and for all. It also requested Korea take down comfort women statues outside the Japanese embassy in Seoul and other locations.