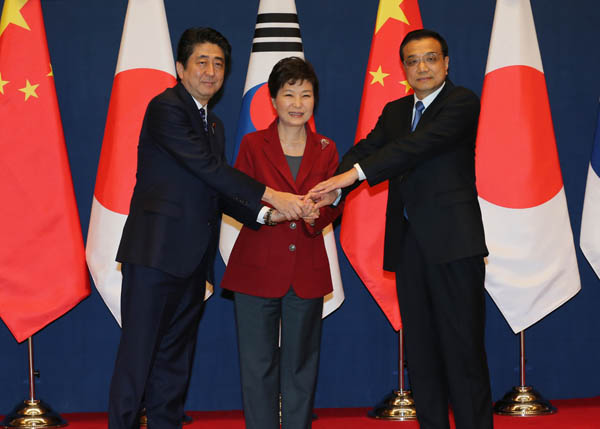 Leaders of Korea, Japan and China agreed Sunday to restore trilateral cooperation and improve bilateral relations for the sake of peace and prosperity in the region, but failed to make tangible progress on the issue of Japan’s attitude toward its wartime history.

Sunday’s trilateral summit was the sixth of its kind. The last one took place in Beijing in May 2012, and the annual summit was then suspended because Korea and China were unhappy with Japan’s pro-military policies and failure to admit or atone for colonial period and wartime misdeeds.

While the leaders agreed Sunday to expand economic and social exchanges among the three countries, it was evident that the history dispute remained unresolved.

In a lengthy joint declaration of 56 points, the three leaders only reaffirmed a very basic stance on the history issue. “In the spirit of facing history squarely and advancing towards the future, we agreed that the three countries should address related issues properly and to work together to improve bilateral relations and to strengthen trilateral cooperation,” it said. No further mention of history was included in the joint declaration.

In her opening remark for the summit, Park said economic interdependence of Northeast Asia had deepened rapidly but political and security problems remained unresolved, undermining the potential of trilateral cooperation.

Park appeared to be referring to Abe’s attempt to expand the role of Japan’s Self-Defense Forces and Tokyo’s reluctance to address Seoul’s demand to resolve the issue of comfort women - Korean women forced into sexual slavery for the Japanese military during World War II.

Park is scheduled have a bilateral summit with Abe today, the first meeting between the two leaders since both took office, and she will likely raise the issue of the comfort women.

The Chinese leader also issued pointed criticism toward Abe, seeming to blame him for the slump in trilateral cooperation.

“Cooperation can be achieved on top of groundwork where sensitive issues including history are handled reasonably and mutual interests of Northeast Asia are improved,” Li said. “We are three close neighbors, but it is unfortunate that there is a lack of understanding between some countries.”

Following the meeting, the three leaders attended a press conference and each issued some remarks but did not take questions. Park said it was meaningful that the three countries finally agreed to restore the trilateral cooperation framework after three years and six months. She also said the leaders had in-depth discussions on key issues of regional cooperation and other international issues.

“We reached the common recognition that the situation in which economic interdependence and political/security tensions coexist must be overcome in order to build permanent peace, stability and co-prosperity in the region, and to continue to develop trilateral cooperation unwaveringly,” the joint declaration said. “To this end, we came to the recognition that respective bilateral ties among the three countries constitute an important foundation for trilateral cooperation, and that the deepening of trilateral cooperation, in turn, contributes to each bilateral relations and to the peace, stability, and prosperity of the Northeast Asian region.”

The three countries also agreed to speedily conclude a trilateral free trade agreement and the Regional Comprehensive Economic Partnership, an initiative of China to form a grand free-trade agreement for the Asia-Pacific region.

During the press conference, Abe thanked Park for arranging the trilateral summit and said he had an opportunity to frankly exchange opinions with Park and Li for the region’s peace and prosperity.

He, however, avoided any sensitive issues such as the history dispute.

“For the reasons everyone knows, the trilateral process had been obstructed over the past three years,” Li said. “Mutual understanding on important issues including history is the precondition for mutual trust,” he said.