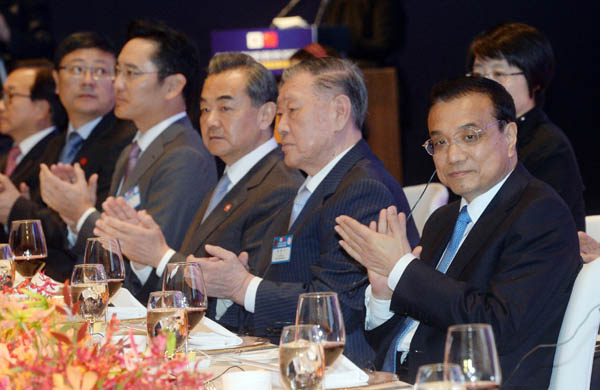 Leaders of Korea and China agreed Saturday to try to ratify a bilateral free-trade agreement before the end of the year and to cooperate further on integrating the region’s economy, the office of President Park Geun-hye said.

Park met with Chinese Premier Li Keqiang at the Blue House on Saturday and discussed a wide rage of cooperative measures between the two countries. They signed 17 memoranda of understanding (MOUs) and one agreement on financial cooperation, the Blue House said.

According to the Blue House, Park and Li agreed to put effort into ratifying the Korea-China FTA before the end of the year. The deal, designed to eventually eliminate tariffs on about 90 percent of the goods traded between the two countries, was finalized in November 2014. China and Korea officially signed the landmark deal in June. It will enter into force after legislatures of both countries approve it.

On Sunday, the Chinese leader paid a visit to Korea’s legislature and met with National Assembly Speaker Chung Ui-hwa and floor leaders of the ruling and opposition parties. According to Rep. Won Yoo-chul, floor leader of the Saenuri Party, Li said the FTA will be a great help to the two countries’ economic development, and Chung promised effort to ratify the deal before the end of November.

During the Saturday meeting, Park and Li also agreed to work for speedy negotiation and conclusion of the Regional Comprehensive Economic Partnership, a Chinese-initiated regional free-trade agreement that involves 16 countries. In addition to China, 10 members of Asean, Australia, India, Japan, Korea and New Zealand are participating in the negotiations.

Of the MOUs signed Saturday, two concerned Korea’s exports of rice and samgyetang, or Korean ginseng and chicken soup.

The two countries agreed on export inspection standards for rice for the first time in six years since Seoul made a request to export rice to China in 2009. Park brought up the rice exports during her summit with Chinese President Xi Jinping on Sept. 2.

Korea will also be able to export samgyetang to China, which it has been working on since 2006.

Korea and China also agreed to share information on the air quality of major cities and yellow dust storms in real time through an exclusive network.

Direct currency trading of the Korean won and the Chinese yuan will also start in Shanghai, following similar trading in Seoul. It will be the first time the Korean won is traded overseas directly, and Korean companies will benefit from it when trading with China.

In addition to economic issues, the two leaders agreed that Korea and China will strengthen their strategic communication on North Korea’s nuclear program and unification of the Korean Peninsula.

The Blue House said Park and Li discussed the progress of Korean peninsular affairs after Liu Yunshan’s recent visit to North Korea. Liu, one of the top leaders of China’s Communist Party and a member of the Politburo Standing Committee, visited the North for the Workers’ Party’s 70th anniversary on Oct. 10 and met with North Korean leader Kim Jong-un. The trip was seen as a sign of improving ties between Beijing and Pyongyang.

According to the Blue House, Park asked China to continue playing a constructive role in regards to North Korea.