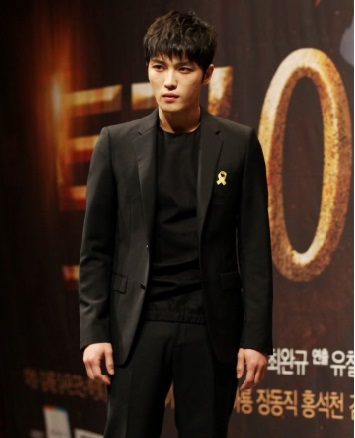 Kim Jae-joong, a member of the K-pop trio JYJ, will participate in an upcoming concert in Icheon, Gyeonggi, on Nov. 12.

According to Icheon City, Kim, who is fulfilling his mandatory military service as a military band soldier, will perform a concert with his military bandmates.

The concert is being organized by the ROK Special Warfare Command to mark its relocation to Icheon.

The concert begins at 7 p.m. at Icheon Art Hall.

Kim joined the military in March and has been taking part in military events since then. Most recently, Kim sang the national anthem for a Korean Series game in Daegu on Oct. 26.

He also attended the 2015 Korean Popular Culture and Arts Awards with other JYJ members to receive an award from the prime minister.

But the singer-actor came under fire for fumbling the lyrics of the national anthem at the baseball game and for attaching the national flag patch to his uniform upside down at the awards ceremony.

Kim debuted in 2004 as a member of the K-pop boy group TVXQ, but he walked out of the group with fellow members Park Yu-chun and Kim Jun-su after the three filed a lawsuit against SM Entertainment to nullify the validity of their contracts, citing unfair distribution of income and an overly tight schedule.

The three formed JYJ in 2010, a year after their departure from SM.

Kim will be discharged from the Army next December.