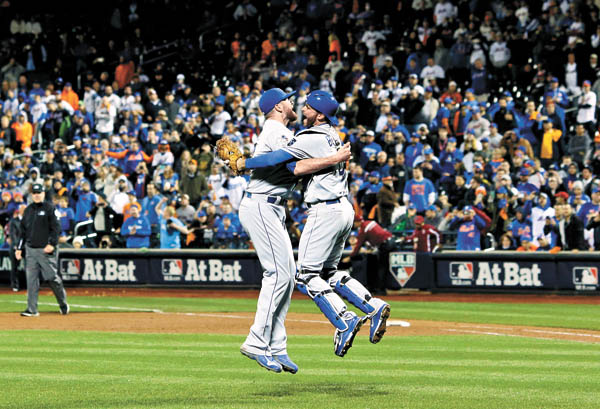 NEW YORK - The Kansas City Royals won their first World Series crown since 1985 in fitting style on Sunday by pulling off another of their trademark late comebacks to beat the New York Mets 7-2 in 12 innings, leaving the home team to rue some critical late mistakes.

A year after losing in seven games to San Francisco, the Royals made up for it with another never-say-die rally after being held scoreless for the first eight innings.

The Mets led 2-0 going into the ninth, and manager Terry Collins elected to bring back starter Matt Harvey, who was bidding for a rare World Series shutout but whose pitch count was already into three figures.

Harvey gave up a walk and then an RBI double to Eric Hosmer, which made it 2-1, and was immediately replaced by closer Jeurys Familia.

A fly ball got the first out of the inning, but advanced Hosmer to third base, and then came the critical play.

Royals catcher Salvador Perez, who was later named as series MVP, hit a slow ground ball toward third baseman David Wright, who froze Hosmer with a glance and threw across the diamond to first base for the second out.

Hosmer, however, bolted for home plate as soon as Wright released the ball.

First baseman Lucas Duda had a chance to complete a double-play but fired his throw wide of catcher Travis d’Arnaud when a good throw would have been in time, ended the game, given the Mets the win, and sent the World Series back to Kansas City for Game 6.

Hosmer made a headfirst dive home with the tying run, and given Kansas City’s history of successful late rallies - all four of their wins in the series were come-from-behind victories - there was an immediate sense of inevitability about a Royals victory.

One agonizing step from ecstasy last season, this time the Royals reign after their latest incredible comeback, and a go-ahead hit in the 12th inning from maybe the most unlikely player in uniform.

Christian Colon, making his first at-bat in four weeks, singled home the tiebreaking run to begin a five-run avalanche that buried the Mets. Lorenzo Cain effectively sealed it with a three-run double.

Now, this group of homegrown favorites who turned around a floundering franchise - Mike Moustakas and Alex Gordon and Hosmer - take their place in Royals history alongside George Brett, Willie Wilson, Bret Saberhagen and the champs from 30 years ago.

They couldn’t have done it without major contributions from newcomers like Ben Zobrist, Johnny Cueto, Kendrys Morales, Chris Young and Alex Rios.

Collins admitted to a mistake in letting Harvey go back out for the ninth, and both the manager and the pitcher, errant thrower Duda, and Familia - the first closer in World Series history to blow three save opportunities - will be left to reflect upon those mistakes.

“I let my heart get in the way of my gut,” Collins said. “I love my players. And I trust them. It didn’t work. It was my fault.”

Curtis Granderson had put the Mets ahead with a leadoff homer in the first inning, and the Mets managed a 2-0 lead against heavy-hearted Royals starter Edinson Volquez, pitching one day after returning from his father’s funeral.

But for these resilient Royals, no deficit is too large, no time in the game too late.

“We never quit. We never put our heads down,” Perez said. “We always compete to the last out.”

For the rising Mets, it was a bitter ending to a storybook season. Underdogs in the National League East division, they re-energized fans at Citi Field during their first season with more wins than losses since Shea Stadium was still home in 2008.

They swept the Chicago Cubs for their first NL pennant in 15 years but remain without a World Series title since 1986. AP