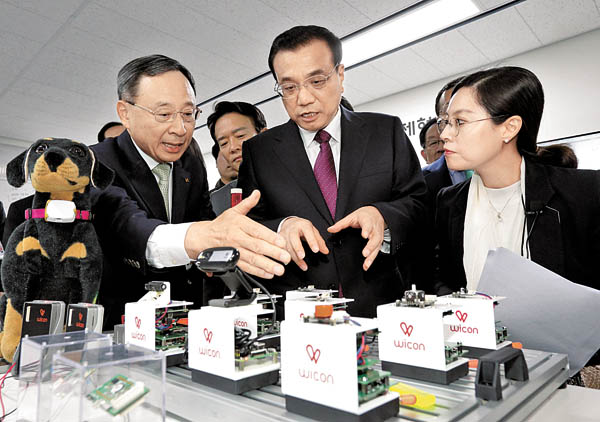 Chinese Premier Li Keqiang visited the Gyeonggi Center for Creative Economy and Innovation (CCEI) on Monday to sneak a peek at Korea’s tech scene and bolster cooperation between Korean and Chinese start-ups.

The Chinese leader chose to tour the center in Pangyo, run by second-largest mobile carrier KT, for the last day of his official visit to Seoul - an indication that the Chinese government is highly interested in Korea’s information and communications technology (ICT) field, KT said.

“The CCEI supports the entire process for its start-ups - from investment and R&D to establishing the business model and paving sales channels,” Hwang said.

When the chairman said he is glad to see the business cooperation between Korea and China evolving - notably in terms of technological convergence such as the Internet of Things (IoT) - Li responded that it would be great if both countries could enter the international IoT market together. The Gyeonggi center is one of 18 CCEIs that have opened nationwide since September last year as part of the creative economy drive, a top policy agenda for the Park Geun-hye administration.

Since launching in April, the Gyeonggi center has hosted various events for start-ups, including Demo Days, where founders can pitch their ideas to potential funders, and international conferences.

The center has also provided financial and administrative aid for fledgling entrepreneurs to participate in start-up competitions in Silicon Valley.

The center’s location in Pangyo, at the heart of Korea’s rising start-up and tech town, has given it an edge to grow into a leading start-up accelerator among those CCEIs, Hwang said.