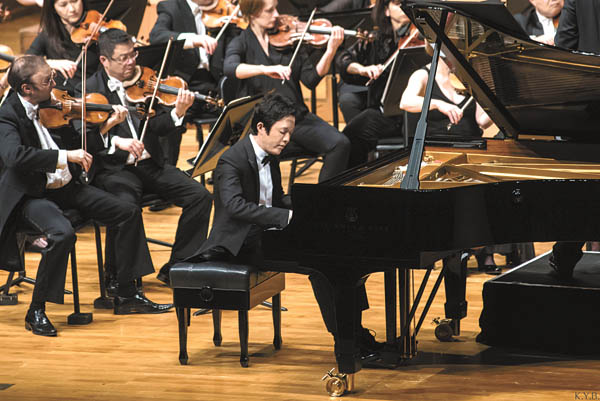 Chinese pianist Li Yundi performs Chopin’s Piano Concerto No. 1 with the Sydney Symphony Orchestra on Friday at the Seoul Arts Center. During the performance, he abruptly stopped playing after making a mistake. [SENA]

Chinese pianist Li Yundi, who is widely known as “Yundi, the Chopin specialist,” disappointed Korean fans Friday evening at a concert in Seoul.

Li won first prize at the International Chopin Piano Competition in 2000 at the age of 18, becoming the youngest winner and the first Chinese winner. Recently Korean pianist Cho Seong-jin, 21, took top place at this year’s edition of the competition.

The 33-year-old pianist accompanied the Sydney Symphony Orchestra to play Chopin’s Piano Concerto No. 1 under the baton of David Robertson in a performance at the Seoul Arts Center.

Li, who was even one of the judges at this year’s Chopin competition, began to lag half a beat behind the orchestra while playing the first movement. He then became even more out of synch before stopping completely.

After a few moments of awkward silence, Li resumed playing at a piano solo, and the orchestra eventually rejoined. However, after the performance he quickly left the concert hall, cancelling a fan meet event and press interview that had been scheduled after the concert. Fans were not impressed.

“I’m a big fan of Yundi so I’ve been waiting for this concert for months,” said Lim Hae-sook, who was at the concert with her husband. “Everyone was just dumbfounded.”

Lim said as she has been a fan of Li for a long time, but his performance on Friday looked like he was only “playing to relax his fingers.”

According to classical music columnist Ryu Tae-hyung, it’s unprecedented for a top-class classical music performer to stop playing before a movement comes to an end, even after making a mistake. But what disappointed attendees was not Li’s mistake but his behavior afterward.

After canceling his engagements after the concert, with the explanation that he wasn’t feeling well, he later uploaded a photo to his Facebook account of himself dressed in a Halloween costume, with the caption, “I’m gonna freak you out tomorrow.”

Many fans and critics took offense.

“Stopping the concert in the middle was already a problem, but his words and actions should be taken into account,” Ryu wrote in the JoongAng Ilbo.

“After his performance, he gave one curtain call and a nod to the conductor and left the concert hall for his hotel room. He didn’t apologize to anyone,” Ryu continued, adding that Li’s Facebook post was inappropriate.

The post has since been deleted, and Li wrote a new post on Sunday afternoon that read, “It’s always been a pleasure to come to Korea. Thanks for all your support and hope to see you again.”

Since then, netizens have been writing responses to the post, some supporting the musician and some criticizing his “arrogant attitude.” And Korean media outlets are reporting that some concert attendees have even gone so far as to request refunds for their tickets.

“I’ve anticipated this concert so much that I can’t describe how disappointed I am,” Lim said. “However, I will not ask for a refund, for the orchestra and the maestro performed until the very end despite such an occurrence.”