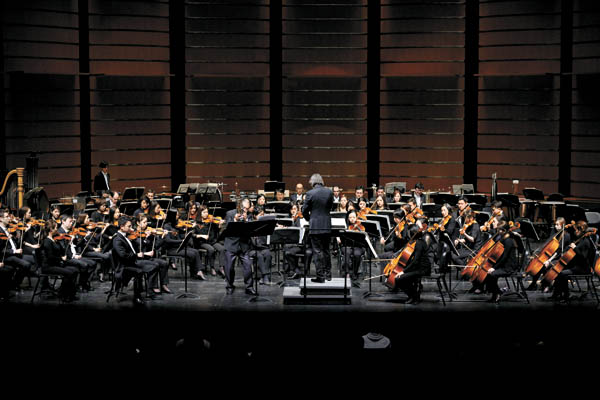 The Seoul Philharmonic Orchestra and Wu Wei perform Jukka Tiensuu’s “Teoton” under the baton of Ilan Volkov on Friday at the Sejong Center for the Performing Arts in central Seoul, as part of this year’s Ars Nova, an annual contemporary classical music concert series presented by the orchestra under the directorship of resident composer Unsuk Chin. [SEOUL PHILHARMONIC ORCHESTRA]

Although the sheng, a traditional musical instrument that dates back 4,000 years also known as the Chinese mouth organ, originated in China, it spread to both Japan and Korea in ancient times, coming to Korea as the saenghwang after the Three Kingdoms era (57 B.C. to 668 A.D.).

However, unlike other traditional instruments that are still familiar to people today, such as the gayageum (traditional zither) and the daegeum (horizontal bamboo flute), the sheng has been relatively unknown in Korea for a long time.

In an effort to bring back the forgotten tradition as well as spread the beauty of this unfamiliar instrument, this year’s edition of the Ars Nova series - presented annually by the Seoul Philharmonic Orchestra - is focusing on the sheng.

The first concert of this year’s Ars Nova was held on Friday, and the second will take place Thursday at the Sejong Center for the Performing Arts in central Seoul. 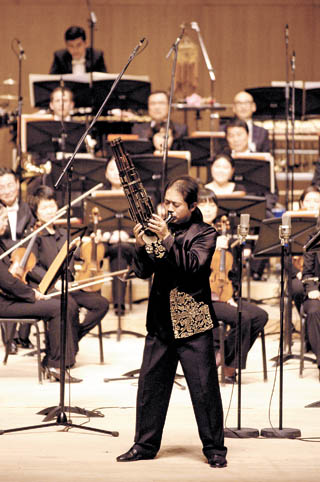 Wu Wei from China performs the 37-pipe sheng he developed himself during this year’s Ars Nova concert series on Friday. [SEOUL PHILHARMONIC ORCHESTRA]

The sheng usually consists of 17 vertical bamboo pipes with holes. A player must pour hot water inside the instrument to create steam before playing the instrument via a mouthpiece. However, for the Ars Nova concerts, two sheng players - Wu Wei from China and Gamin from Korea - will play sheng with 37 pipes with keys, which Wu developed himself.

“There are two types of sheng in China, the traditional one and the modern one,” Wu explained. “I developed this one to expand the range of the pitch, but this is still traditionally based.”

“The sheng is such an attractive instrument for composers,” said Unsuk Chin, resident composer of the Seoul Philharmonic Orchestra, explaining why she decided to bring this traditional instrument to the fore at her groundbreaking contemporary music concert series, which she started in 2006.

“Since I wrote ‘Su,’ a concerto for the sheng, many Western composers are becoming interested in the instrument little by little, so I also wanted to take this opportunity to allow other composers to work with the instrument as well,” Chin continued.

In 2001, Chin gained international recognition as a contemporary music composer after winning the prestigious Grawemeyer Award for her Violin Concerto.

For this year’s Ars Nova, Finnish composer Jukka Tiensuu wrote a piece titled “Teoton” for Wu’s sheng, and the Seoul Philharmonic Orchestra and Wu staged its world premier on Friday, under the baton of Ilan Volkov.

Thanks to Wu’s updated version of the instrument, composers can experiment with a traditional instrument that is usually limited in pitch range.

Park wrote a piece titled “Into...” for the sheng and an ensemble that will have its Asian premier at the concert on Thursday. Gamin will perform the piece on the 37-pipe sheng.

“But this sheng with 37 pipes enjoys freedom in pitch range like other Western instruments, yet it has such a unique sound. The instrument is very attractive,” Park added. But because he was so unfamiliar with the sheng, he had to sit next to Wu to learn the instrument in order to compose the piece.

Chin also highly praised the “unique and beautiful sound of the sheng,” and said that even though the instrument originated in China, it also has a proud history in Korean traditional music, and “even our late composer Isang Yun [1917-95] yearned for.”

“It’s a shame,” she said. “Since there’s no major for sheng at music colleges in Korea, I also majored in piri myself and play the sheng on the side. I hope this concert is an opportunity shed new light on the sheng.”