First trip to Kaesong by lawmakers in 2 years

First trip to Kaesong by lawmakers in 2 years 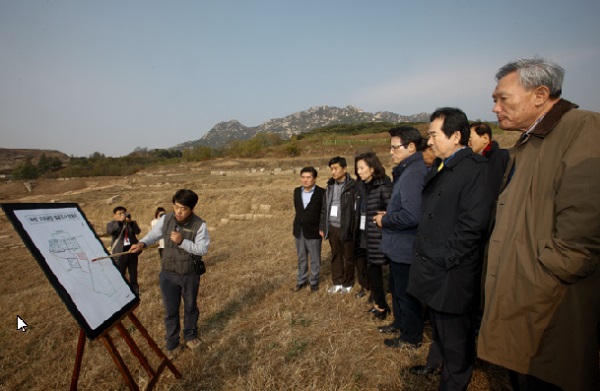 A group of lawmakers from the National Assembly’s Foreign Affairs and Unification Committee including its chair Rep. Na Kyung-won, third from left, visits an excavation site of the Manwoldae Palace from the Goryeo Dynasty (918-1392) in Kaesong, North Korea Monday. [MINISTRY OF UNIFICATION]

A bipartisan group of lawmakers traveled to Kaesong to visit the excavation site of an ancient palace, the first visit by lawmakers of the parliamentary unification committee to North Korea in two years.

Nearly two dozen lawmakers on the National Assembly’s Foreign Affairs and Unification Committee, chaired by Rep. Na Kyung-won of the ruling Saenuri Party, came across the heavily fortified border to visit Kaesong, home also to the joint industrial complex that is the last vestige of inter-Korean business cooperation from the Sunshine Policy days.

Accompanied by 36 South Korean officials, 22 lawmakers paid a visit to the excavation site of the Manwoldae Palace of the Goryeo Dynasty (918-1392). South and North Korean archeologists have been conducting joint excavation work on the royal palace since 2007. The joint work has been on and off over the past eight years depending on the state of inter-Korean relations.

The visit by the lawmakers to the border city was the first in two years following a 2013 visit to the joint industrial complex, where 124 South Korean companies churn out products using cheap labor provided by over 54,000 North Korean workers.

The lawmakers also paid a visit to the tomb of King Wang Geon, the founder of the Goryeo Dynasty and returned to the South at around 3:30 p.m.

The one-day trip is the latest sign of some thaw in inter-Korean activities following reunions of families separated by the 1950-53 Korean War that took place last month. Both events have raised hopes that the two Koreas are gaining momentum to improve ties.

Such hope was reflected in a comment by committee chairwoman Na, who said the Monday trip carried significance in that it could “forge momentum for the two Koreas to strengthen cooperation,” before departing for the North.