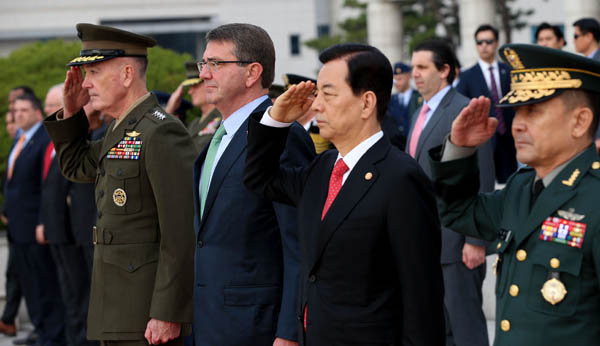 Under the guidelines, the two allies will work to “detect, disrupt, destroy and defend against North Korean missile threats, including nuclear, chemical and biological warheads.”

The adoption of the 4D guidelines came amid growing concerns over North Korean capabilities in developing long-range missiles.

“Secretary Carter and I have agreed to cooperate in a mutual and comprehensive defense system against North Korean missile threats, which have intensified [in recent months] as shown by the North’s continuing efforts to miniaturize nuclear warheads and test-launch SLBM [submarine-based ballistic missiles],” Minister Han said during a press conference following the annual meeting.

North Korea is assessed to have completed the development of an inter-continental ballistic missile referred to as KN-08 capable of flying up to 12,000 kilometers (7,500 miles), which can target the U.S. mainland. If it succeeds in miniaturizing a nuclear warhead and mount it on the KN-08, Pyongyang could hit the United States with a nuclear missile.

Standing next to Han, the U.S. secretary noted that North Korean threats, including nuclear weapons, ballistic missiles and cyber and conventional threats, “continue to put at risk the peace and security on the peninsula, the region and the United States.”

The two men said Seoul and Washington would continue to hold joint military exercises to sharpen the joint defense posture against potential provocations by the North.

The annual high-level defense meeting came a day after Carter visited the joint security area in the demilitarized zone, his first visit as defense secretary, on his first day of a weeklong Asia tour. Standing before somber-looking soldiers facing off against North Korean guards at Panmunjom, Carter called on the North to downgrade and eventually shut down its nuclear program.

“They should be on a path of doing less, and ultimately zero, in the nuclear field,” he said on Sunday.

On the United States’ challenge last week of Beijing’s territorial claims around man-made islands in the South China Sea, Minister Han appeared to back Washington when he said, “The freedom of navigation and flight should be guaranteed in the South China Sea,” during a press conference. Han’s remark on Monday could provide a small glimpse of Seoul’s position on the issue that elevated tensions between the world’s two superpowers.

Tension in the region flared last week when a U.S. warship sailed within 12 nautical miles of one of China’s artificially dredged islands in the South China Sea, drawing a direct rebuke and warning from Beijing, which demanded Washington put an end to “provocative acts.”

At first, Seoul appeared careful not to take sides in the dispute and called for a peaceful resolution of territorial disputes and restraint.