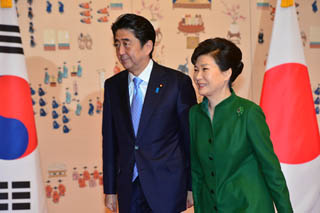 The leaders of Korea and Japan vowed on Monday to speed up negotiations over Japan’s wartime misdeeds, particularly the Japanese military’s wartime sexual slavery of Korean women, taking a first step to thaw frozen bilateral relations.

President Park Geun-hye and Japanese Prime Minister Shinzo Abe held a bilateral summit meeting Monday morning at the Blue House, the highest level of talks between the nations in three years and six months. It was the first bilateral meeting between Park and Abe since each of them assumed office.

While no breakthrough was made at the summit to settle acrimony between Seoul and Tokyo over the issue of the so-called comfort women - Korean women forced into sexual slavery for the Japanese military during World War II - the meeting was seen as a step forward.

“The two leaders shared the understanding that this summit must serve as an important turning point to improve bilateral relations,” Kim Kyou-hyun, senior presidential secretary for foreign affairs and security, said after the summit. “They agreed to put more efforts into building more forward-looking and mutually beneficial cooperative ties by resolving the pending issues that have obstructed improvement of bilateral relations.”

Park and Abe met for 98 minutes in two separate sessions. The two leaders first talked for 60 minutes accompanied by only a few key foreign affairs and security aides. After that session, they attended an expanded summit for 38 minutes with more participants from both sides.

Japan’s reluctance to address Korea’s demand to resolve the comfort women issue was a key topic during both sessions. The two leaders managed to avoid a clash and agreed to expedite negotiations to find a resolution at an early date. While no clear timeline was provided, Seoul and Tokyo hinted that they may see progress in the matter before the end of this year.

“Park pointed out that the comfort women issue is the biggest obstacle in improving the two countries’ relations,” Kim said. “She stressed that this issue must be resolved as soon as possible with a resolution that is acceptable to the victims and convincing to the Korean people.

“Keeping in mind that this year is a turning point marking the 50th anniversary of normalization of ties between Korea and Japan, the two leaders ordered [their governments] to speed up negotiations to resolve the comfort women issue as soon as possible,” Kim said.

Ahead of the summit, Park made clear her wish to conclude the matter before the end of this year. “I truly wish for the comfort women issue to be resolved within this year through the Japan-Korea leaders’ summit and to heal the wounds of the victims,” Park told Japanese newspapers last month.

Over the past years, Seoul made repeated demands that Tokyo accept its responsibility for sexual slavery, and offer an apology and compensation to the victims. Japan, however, refused to accept the forced nature of the recruitment of women. It also maintains that all war-related compensation issues, including the comfort women, were settled under a 1965 treaty normalizing diplomatic relations between Tokyo and Seoul.

From April 2014 through September, Korean and Japanese diplomats had nine rounds of negotiations to resolve the issue, but little progress was made.

Park aides hinted that Abe was strongly pressured to wrap up the issue before the end of this year. “It is important to pay attention to the part that the two leaders noted that this year is the 50th anniversary of the normalization and this year is a turning point,” a senior presidential official said.

In a meeting with Japanese reporters after the summit, Abe confirmed that he and Park agreed to speed up negotiations to find a resolution as soon as possible, “keeping in mind that this year is the 50th anniversary of normalization.”

He also said that he doesn’t want the comfort women issue to become an obstacle to Japan’s future generation building forward-looking ties with Korea. A Japanese official said Abe’s remark was an expression of his intention to properly and thoroughly conclude the issue so that it will never be raised again.

In past negotiations, Tokyo has demanded that if any resolution is agreed upon, Seoul should declare that the settlement is final and not raise the issue again, diplomatic sources have said.

The opening remarks of the two leaders clearly portrayed the disparity in their views of the comfort women issue. While Park issued a more direct challenge to Abe to confront Japan’s wartime past, Abe used his opening remark to stress the two countries’ future.

“Trust is the most important value in diplomacy,” Park said in opening remarks for the second session of the summit. “I hope today’s summit will heal the painful history with a broader view and sincerity, and serve as a precious opportunity to improve the two countries’ relations.”

She also said it is important for the two countries to overcome disputes over history and create a new starting point for their future together, since this year marks the 50th anniversary of normalization.

Experts said the summit itself was important progress in improving Korea-Japan relations.

“It is significant that the summit actually took place,” Prof. Lee Won-duk, head of Kookmin University’s Institute of Japanese Studies, told the JoongAng Ilbo. “It is the first step in normalizing frozen ties. It is a great improvement from the past, when the two leaders refrained from sitting down to discuss the history issue.”

He said it was unfortunate that the two leaders failed to declare a deadline for solving the comfort women issue.

Park and Abe discussed other issues including trade and economics, as well as North Korea’s nuclear arms program.

They agreed to continue bolstering their cooperation to counter the North’s nuclear threat bilaterally and trilaterally with the United States, the Blue House said.

In terms of economics, Park and Abe agreed to continue the two countries’ cooperation to integrate the East Asian regional economy through a Korea-China-Japan free trade agreement and Comprehensive Economic Partnership.

According to Kim, Park told Abe that she expects bilateral trade cooperation to continue through the Trans-Pacific Partnership (TPP) if Korea decides to join it in the future. Abe replied that Japan has been closely following Korea’s deliberations on whether to join the TPP.

According to An Chong-bum, senior presidential secretary for the economy, a high-level consultative body will be established between Seoul and Tokyo to follow up on economic agreements.