The inside story of the Park Chung Hee killing

The inside story of the Park Chung Hee killing

President Park Chung Hee enjoys a drink with Kim Gae-won, middle, and Cha Ji-cheol in 1979, in his hometown in North Gyeongsang. [Kim Jong-pil]

I stayed at the Blue House until the early morning after that fateful night of Oct. 26, 1979.

I met Chief Presidential Secretary Kim Gye-won and dragged him to his office on the second floor to hear what had happened to President Park Chung Hee, murdered just hours before by his longtime confidant Kim Jae-gyu.

“Tell me everything you know so that I can make a record of everything I know about the death of the president,” I demanded. 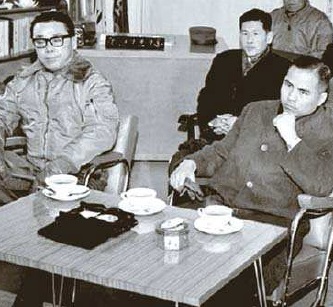 Cha Ji-cheol, far right, is briefed by a lawmaker in February 1964 during a visit to the headquarters of the Army’s sixth division. Kim Jae-gyu, who killed Cha 15 years later, sits on the far left. During the later years of the Park Chung Hee government, Kim often found himself outraged by what he perceived to be Cha’s rudeness. [National Archives of Korea]

Kim’s jacket was stained with Park’s blood. He had taken Park’s body to the Armed Forces Seoul Hospital from the restaurant where the president had been fatally shot.

Unable to bring his thoughts together, Kim continued to blame himself. “I was such an idiot!”

The things he told me in his office that night were things he did not reveal later in the investigation and court trials. I believe what he told me can bring us a step closer to knowing the truth.

The following is a summary of what Kim told me:

The president, feeling upbeat after his attendance of a ribbon-cutting ceremony to mark the erection of a seawall on the Sapgyo Stream in Asan, South Chungcheong, ordered his subordinates to arrange a banquet in Gongjeong-dong, central Seoul.

Before dinner, Kim Gye-won had a chat with Kim Jae-gyu, who fatally shot the president later in the evening.

Gye-won recalled Jae-gyu telling him, “If we’re too harsh in suppressing the demonstrators in Busan and Masan [calling for democracy], there will be a huge backlash from the people down there. But the ruling Republican Party isn’t giving President Park the right advice because it fears Cha Ji-cheol. I am going to get rid of him today.”

Taking Jae-gyu’s comment as a joke, Gye-won replied, “Yeah, that bastard deserves to be punished.”

In hindsight, Gye-won thought Jae-gyu had meant to scare Cha Ji-cheol, who had called on President Park to deploy forces to quell the protesters in both southern cities.

At the time, President Park was mulling sacking Kim Jae-gyu as head of the intelligence agency because he thought Jae-gyu had failed to control the opposition party and its chief, Kim Young-sam.

Kim Jae-gyu was under the illusion that he had lost credibility with Park due to Cha’s dirty tricks.

At 6:05 p.m., Park and Cha arrived at the restaurant, which was guarded by KCIA personnel. Cha did not have a pistol on him. Park sat at the center of the dinner table, facing Kim Jae-gyu. Cha sat to Park’s left, and to his right was Kim Gye-won.

As the president sat down, he started lashing out at Kim Jae-gyu, his longtime confidant.

“Jae-gyu, my disappointment in you grows day by day. You are just utterly disappointing in your job. … How can you do nothing to quell the protests in Busan and Masan with all the money I have given you? What excuse do you have this time?”

Cha interrupted Park: “The situation has gotten worse due to the government’s inaction.”

Kim Jae-gyu, meanwhile, sat in silence, taking in the criticism.

Park continued to scold him for his lackluster performance as intelligence agency chief as if he were a child.

Kim, who avoided drinking because of his liver, indulged himself that night, and his temper neared a head at around 7:40 p.m.

Park continued: “I should have arrested Kim Young-sam, but I didn’t because Lew Hyuck-in [the first presidential political affairs secretary] advised me against it. But that has just increased the chaos.”

Jae-gyu objected to Park’s assessment. “The people believe Kim was punished sufficiently by being expelled from the Assembly,” he said.

But Park did not agree, “The KCIA needs to be more threatening. It needs to move faster to deal with irregularities by opposition lawmakers when it has evidence, instead of standing idly by.”

Before the conversation, Kim had left the table and went outside to his office, where he collected his pistol, a German Walter PPK .32.

Back at the table, he raised his voice: “Politics should recognize each side as a rightful partner, and you should be willing to give your partner some incentive in return for having your demands answered. Unless you promise them that incentive, the opposition will never answer your call.”

At the time, lawmakers from the opposition New Democratic Party, led by Kim Young-sam, had tendered their resignations in protest of Kim’s expulsion from parliament.

Cha dissented: “None of those fools really meant to give up their seats. I will stop them with tanks if I have to. I don’t care if they’re lawmakers.”

And it was at that moment that Kim Jae-gyu stood up, shouting profanity, with his pistol in his right hand.

“You bastard, go to hell!” he screamed, shooting Cha in his right elbow.

He then turned to Park and unloaded more profanities at him.

“You too can go to hell!” he screamed, shooting the president in the chest.

After that shot, the gun jammed. He tried to pull the trigger, but was unsuccessful. Kim later testified in a court that his actions were deliberate to restore democracy. But none of it was true. If the assassination had truly been premeditated, he would have known how many bullets he had in his pistol and it wouldn’t have jammed.

After his weapon got stuck, he left the room and took a .38 revolver from a KCIA subordinate. He found Cha, who was hiding out in the restroom, and shot him in the chest.

By that point, Kim was completely out of his senses. He came back to President Park, who was bleeding, sitting in a chair. He aimed his gun at Park’s head and fired.

Looking back on it, Cha, whose job was to protect the president at all costs, had fled to the restroom, while Park died at the hands of his intelligence chief without any means to defend himself.

Presidential security had collapsed due to the cracks inside Park’s power circle.

Kim Gye-won, a former four-star general, crawled out of the room and escaped, frightened by the chaos. It only adds to the tragedy that Kim Gye-won, the former Army chief, did nothing to stop Jae-gyu, and instead fled for his life.

As I listened to Gye-won’s account, I had to breathe deeply to stay composed. The profound sense of shock, anger and sadness was too much.

Then I recalled my conversation with a fortune-teller 18 years ago.

The fortune-teller, whom I visited after the May 16 revolution [coup] in 1961, told me and Park that his revolution would succeed and that his government would last about 20 years.

But as I was about to leave, the fortune-teller approached me and whispered, “I couldn’t say this to Park directly, but I saw that his end will not be good. It will come about in an ugly way.”

In hindsight, that “ugly way” turned out to be his assassination.

Over the next 18 years, I kept that prediction to myself and never told a soul. And then, nearly two decades later, it came true.