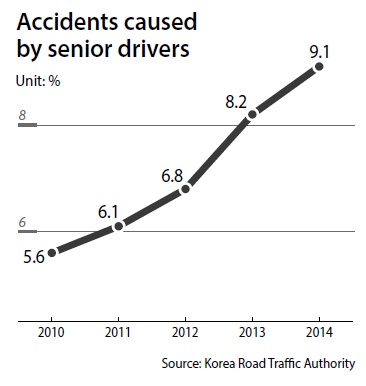 A report about a 75-year-old taxi driver behind a series of car accidents that resulted in 500 million won ($448,000) worth of damage made waves across the Internet earlier this month.

While driving through the Lotte Hotel parking lot in Jung District, central Seoul, the cabbie, surnamed Seo, successively bumped into four parked vehicles, two of which were luxury cars.

Although the senior driver insisted the incident was caused because he had unintentionally and suddenly accelerated, the police determined after reviewing black box footage that it was instead the result of Seo’s poor driving.

However, the incident is not unusual considering recent statistics, which show that car accidents caused by senior drivers have been on the rise over the past five years.

Senior drivers aged 65 and above were responsible for 5.6 percent of total traffic accidents in 2010, according to a big data analysis calculated by the Korea Road Traffic Authority (KoRoad), a state-run traffic research organization.

That figure number increased to 6.8 percent in 2012, and 8.2 percent the following year. The figure peaked last year, jumping to 9.1 percent.

“Compared to the younger generation, senior drivers record higher accident rates, particularly in terms of violating traffic signals,” said Park Gil-soo who heads the center for accident analysis at KoRoad. “It is assumed that their physical decline increases the odds for causing accidents.”

KoRoad’s research also found out that senior drivers’ reaction time was 10 milliseconds slower than that of their younger counterparts.

In an effort to prevent such accidents, the government has spared no efforts.

According to a plan by the government released in mid-October on how to effectively deal with the country’s low birthrate and its aging population, senior drivers will be required to take a functional recognition test starting in 2017.

People 65 and over will also be required to receive traffic safety education.

Officials are also considering changing the frequency of regular driving aptitude tests, from once every five years to once every three years.

Some countries encourage older drivers to turn in their driver’s licenses in exchange for discounts on public transportation fees. Japan, for instance, which has a rapidly aging population, has promoted such a system since 1998.

Still, authorities add that improvements in road safety will be contingent on whether the older generation chooses to change its own mindset ? one KoRoad survey in 2012 revealed that 57 percent of senior citizens aged 65 and above did not consider themselves old.

“[Senior citizens] should acknowledge that their [physical reactions and capabilities] are different from those of younger people,” said Kang Soo-chul, a KoRoad researcher, adding that it would be helpful in improving road safety if senior drivers took free cognitive tests.