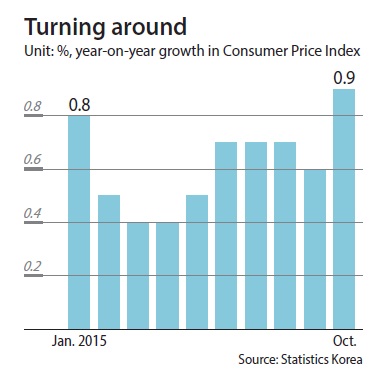 Despite a slide in petroleum product prices of nearly 18 percent and a more than 7 percent cut in electricity, water and gas bills, all of the remaining four sectors - rents, public and private services and fresh foods such as agricultural, fishery and livestock products - climbed more than 2 percent each.

In particular, fresh food prices jumped 3 percent in October, pushed up by a severe drought during the summer monsoon season.

At the same time, the Korea Black Friday sales, which the government ambitiously launched to stimulate consumption by cutting prices at more than 200 traditional markets and several department stores, put downward pressure on the price of manufactured items by 0.3 percent from a year earlier.

“The two-week Black Friday event partly affected the retail prices of some manufactured items such as televisions, clothes and kitchen utensils,” Wu Yeong-je, a Statistics Korea official, said by phone.

The total volume of retail sales stood at 31.1 trillion won ($27.4 billion), only about 30 million won less than in May, showing that consumption has bounced back to its level before the outbreak of Middle East respiratory syndrome in June.

The rebound in consumer inflation came as good news for the economy because the index has yet to go above 1 percent this year. Flat inflation prompted worries that Asia’s fourth-largest economy could be slipping into deflation.

Some economists say it’s too early to cheer given other gloomy indicators, particularly falling exports.

In October, Korea’s exports plunged 15.8 percent from a year earlier, the sharpest fall in about six years.

The Producer Price Index, a predictor of consumer prices in the future, also dropped 4.5 percent in September to its lowest level in more than five years.